If you only read one book this summer.... Read Smith Henderson's Fourth of July Creek

I'm not kidding. Every once in a great while a book like this comes along. A book that you stay up late and get up early to read. A book that you think about, talk about, worry about until you can finally struggle out of whatever else is keeping you from the book and go back to reading. A book that is as momentous as a raging love affair- you want to furtively secret it away in your own heart and scream its name from the middle of an interstate highway at the same time. And when it is over, when you have finished reading the last page, when you are staring dumbly at the back cover wondering what the hell you are going to do with your life now, you know that you have just experienced something bordering on the sublime.

How to describe Henderson's book? I could say that it's the story of social worker Pete Rose who becomes entangled in the life of mountain survivalist and conspiracy extremist Jeremiah Pearl and his young son Benjamin. That the resulting conflicts, which spin wildly out of control and draw the attention of federal agents, mirror Pete's own tail-spinning family life until there are no longer any lines to blur. I could say that it is a political commentary on American rights and freedom, an epic personal odyssey of tumultuous personal relationships and a glimpse into the life and mindset of those we feel to be 'others,' but who are so clearly ourselves.

I could also say that it is ripping, gasping, slashing, aching, suffocating, torrential, mournful, shattering, and disturbingly, disastrously beautiful. Both the story and the writing will tear you up from the inside out and leave you breathless and in awe. Take your pick.

Either way, Fourth of July Creek will renew your faith in the possibilities of pure, raw American writing.

Yes. It's that good. Now go buy it and read it already. 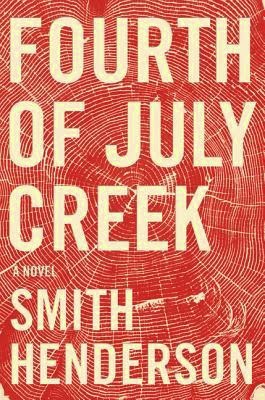