To go ahead and state the ridiculously obvious- I have a lot of tattoos. I'm honestly not exactly sure how many. One of my students really wanted to know once, I think it was for a research paper or something, so I tried to figure it out, but all I came up with was that I Think I've been under the needle over 30 times. That being said, I don't really like to talk about my tattoos. I gave up hanging around tattoo shops years ago and I'm one of the most awkward people ever when people ask the dreaded question: 'so what're your tattoos of?' This, usually while I'm waiting in line at the grocery store, already anxious to escape, because, well, I'm in a grocery store for Christsakes. So I usually answer something along the lines of 'stuff,' which probably makes the teenage cashier who thought she had a friend for life in me think I'm a total bitch. Except that then comes the inevitable, 'so what'd they mean?' to which I eloquently respond 'oh, you know, things.' Fortunately, the conversation usually ends with said teenage cashier telling me about the tattoo she's going to get next month or showing me the dolphin circling around her belly button while sixteen carts are piling up behind me, but I'm okay with that. Because then I can end on a good note. It's much easier to respond to someone showing off their own tattoos than trying to summarize fifteen years worth of life decisions and thoughts important enough to merit breaking the skin into the fifteen seconds of time between swiping my card and waiting for my receipt.


Hour 1: The outline begins. (which is the least painful part in my estimate) I'm thinking about the research I need to be doing for the new book I'm starting at the end of July. I'm thinking about the books I need to look up for information and a possible new outline process, as I'm doing something completely different from the last two novels I've written. I'm thinking pretty clearly here and only gritting my teeth occasionally.


Hour 2: Finishing the outline, shading begins. At this point endorphins have kicked in, but the shock of switching needles hits and the pain returns. More gritting teeth, and a lot of trying to distract myself with thoughts. I'm not able to focus enough to think about research, so I do a lot of 'daydreaming' about the characters, trying to get into their heads, etc. I'm hoping that I will remember later the revelations I'm discovering, but have been through this enough times to know that I won't. It hurts.


Hour 3: Deep into shading and inner line work, but because of the detail involved it's going slow. At this point I no longer care about writing. I'm bored. The pain isn't bad enough to keep me on edge; I'm so used to it that it no longer matters. I spend a lot of time looking up at the ceiling, making out the shapes of sea creatures in the plaster. Bored.


Hour 4: Final shading. We're trying to knock it out now and so it's just a straight grind. Endorphins have worn off, everything is raw and the drilling on my shin bone is just about the worst thing I've ever felt. This is the teeth gnashing, table gripping part (except, of course, I can't do much of either since I have to stay still) This is the part where in my head I'm screaming, "For the love of God, Come on, Already- How much More can you Possibly have to Do?!?!"


And then it's over. And I have a beautiful new piece. And I go on with my life without bone shattering pain. And I write. 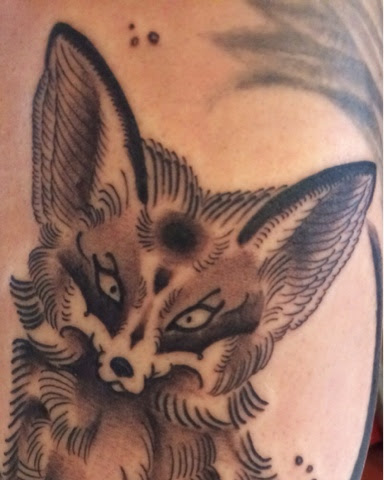