Dancing with the Masters: A Conversation with Mira Jacob, author of The Sleepwalker's Guide to Dancing

Today, I am super excited to bring you an interview with Mira Jacob, author of the debut novel everyone is talking about: The Sleepwalker's Guide to Dancing. Though to be fair, aside from the chronology of this novel in what is sure to be an amazing body of work from Jacob, nothing about this book is akin to a debut. It already belongs on a shelf with the masters and has the makings of a classic before its time. Traveling through decades and across continents, The Sleepwalker's Guide to Dancing is more than just the tale of Amina Eapen and her family. It is an emersion into different cultures, both Indian and American, and an exploration of the truest nature of love, loss and resilience. Jacob's book has a deep heart and an edge of magic to it. It was the sort of novel I reluctantly put down and eagerly picked back up, and I feel truly fortunate to have had the opportunity to catch up with Jacob and to bring her words to you. 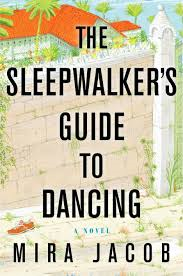 Steph Post: Especially after the first full 'family scene' in India, I was especially struck by how well you handle dialogue in The Sleepwalker's Guide to Dancing. At many points throughout the novel you write these crazy, chaotic family scenes around the dinner table that include many family members, all talking at once, all pushing different agendas, all loving and hurting one another at the same time. In a way, these parts of the novel felt like an Indian August: Osage County of sorts. How did you manage to keep all of the dialogue straight as you were writing these scenes?

Mira Jacob: My mother made me into a rampant eavesdropper. As an immigrant, she is constantly delighted by what Americans will discuss in public, and just as often as not, a dinner out with the two of us is spent with us wriggling our eyebrows at each other. It drives the men in our lives understandably crazy, but it has also turned me into a person who can automatically track an entire conversation with my eyes closed. I know those beats well.

SP: Along the same lines, just as multiple threads of dialogue are woven through these family scenes, multiple timelines are woven throughout the novel as the story flashes back and forth between 1998, 1979 and 1982 to give the reader a full picture of Amina and her family's tale. In crafting the novel, how did you plan out the myriad settings? Did you outline first? Or write each timeline separately? How did you maintain the balance of settings as you were writing?

MJ: You know what's funny? I didn't even consider pacing settings as I wrote. I think in scenes, so I wrote about 400 of them and cut half. In terms of jumping between locations and times, I did plot that out on a wall after my agent told me the story was dying in the middle and my husband (a filmmaker) suggested I try to storyboard.

SP: Your characters, while unique and definitely memorable, seemed completely natural and almost effortless. They were rich and complex- at times, I felt as if I were reading a memoir and not a novel because the characters were so dynamic and realistic. How do you begin the process of crafting a character? Are your characters ever based on or influenced by real people?

MJ: One character in here absolutely is--Thomas, the father. I had originally been writing about a father who was going to be leaving his family somehow, and then in real life my father got cancer and died. To make a long story short, putting him in was the way I dealt with my grief. But the rest of the characters, including Kamala and Akhil, just sort of revealed themselves over time, and became more real to me in the process of writing, to the point where I wasn't sure they didn't exist when I stopped. I missed them. I kept thinking I might run into them. 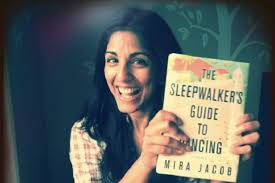 SP: As with all great family dramas, The Sleepwalker's Guide to Dancing is filled with moments of heartache, frustration and triumph. The plot of the novel is buoyed by a series of highs and lows that keep the reader continually invested in Amina's story. Reading your novel was a deep, multi-layered experience, and it never felt like work to get through the narrative. Yet some novels do require a 'labor of love' from the reader and make it worth it in the end. What are your feelings towards this subject? Do you think readers should have to struggle with a novel?

MJ: First--thank you for all these nice things you are saying. When I am lying in bed wondering who I am next year, I'm pulling out this interview and using it as therapy. So as for thinking readers should struggle a bit--I do think that's more than fair. Art is worth fighting for, always. At the same time, after running Pete's Reading Series for 14 years, I have a strong love of a direct narrative that just keeps you pulled in. As a result, I tend to go for complicated structures with very straightforward scenes. It feels like asking the reader to do the right amount of work for the kind of story I'm going to deliver.

SP: The Sleepwalker's Guide to Dancing is your debut novel and it has taken the literary world by storm. Do you think that you have a particular style that sets your apart? Do you want to have a trademark style?

MJ: I had one lovely review that basically said "she's a combination of Bharati Mukherjee, Chitra Banerjee Divakaruni, Jhumpa Lahiri, Arundhati Roy and Woody Allen," which was flattering at every turn, obviously. And one day I hope that combo will be called Mira Jacob.

SP: Speaking of debuts, this has been an incredible year for debut writers. Who are some of your favorite new authors on the scene?

MJ: So many! Right now I'm remembering Marie-Helene Bertino, Scott Cheshire, Courtney Maum, Ted Thompson and Will Chancellor, but I'm sure I'll go away and have 20 pop to mind instantly. We were a bunch of crazy weeds this year.

SP: Finally, we all know that writers are influenced by other writers and other books- who or what outside of the literary world played a significant role in your crafting of The Sleepwalker's Guide to Dancing?
MJ: My dad was a brilliant live storyteller, the best I can think of, actually. Timing, arc, sensibility, he really knew how to pull emotions to an unexpected place, and he was unafraid to hold a silence. I still think about that when I feel stuck. What's going to make the room come apart? Gun for that. 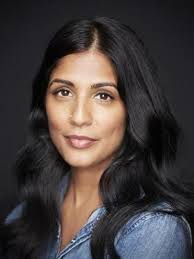 Thanks so much to Mira Jacob for stopping by! Make sure to pick up your copy of The Sleepwalker's Guide to Dancing today!
Posted by Steph Post at 6:37 AM