Sex and Death and Dreams: A High-Speed Interview with Ben Tanzer

Ben Tanzer has been on my radar for while now, every since I read his short story collection Lost in Space last year. I interviewed him, he interviewed me and we bonded over Darth Vader (among many other things). Tanzer is a brilliant writer, a kind and hilarious soul, and a huge advocate in the literary world, both large and small.  He's the kind of guy you'd buy drinks for all night, just to keep him telling stories. I plan to do this if I ever make it out to Chicago, but in the meantime I can content myself with Tanzer's recently released collection Sex and Death. And this interview. Read on...

Steph Post: Okay, I'm going to go ahead and start with point of view. Most of the stories in Sex and Death (and many of your other stories) are written in 2nd person. It's a little unusual, but it absolutely works for your style. Do you find writing in 2nd person POV natural or is this a conscious decision? How do you think writing in this style changes the story-reader relationship?
Ben Tanzer: I rarely consciously start a piece in 2nd person, and I probably never shift to 2nd person when I'm editing, but the dreamier the pieces play out in my head, the more likely they are come out written that way, and ultimately stay that way, and I find that 2nd person reads, and feels, dreamier to me. And so, these pieces started dreamy as I pictured them, and they stayed that way as I edited them. They are stories that take place for the most part in the protagonists' heads and this is what they sounded like my head. As far as the reader goes then, my hope is that reader feels like I'm in their head as well, that I know how they would think and act if they were in the same position and that we are practically in real time as we experience the story - something I'm always interested in - and I think 2nd person invites all of that.
SP: This collection, Sex and Death, obviously contains stories that all feature sex and, less noticeably, death. How did this collection develop? Were any of these stories written specifically for this book?


BT: They were a series of pieces that came together at the same time, not necessarily with a collection in mind - though in general, I'm always thinking in those terms - but as a reflection of a certain kind of mood I was in, seeing things as dreamier, and at a distance, possibly in reaction to the more visceral, or dialogue-driven, The New York Stories - and then as the idea of these pieces were coming together in my head and as a collection started to feel like a thing, I thought of pieces I had written at other times when I was clearly in the same kind of dreamy, distant, out of body mood, and did some retrofitting to further ensure they hung together. 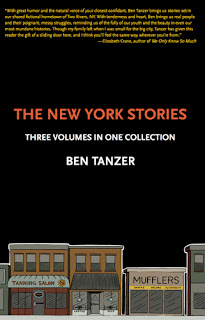 SP: You never seem to shy away from the awkward- whether this be in characters, narrative style or how you make the reader feel. Why is awkwardness something that you have embraced as a storyteller?


BT: I have a lot of things I am easily embarrassed about in myself - a lack of humility for example - but awkwardly making my way through the world is not one of those things, especially in retrospect. But I have embraced it because it's such a universal feeling, common even, and in that, it's such a rich material for writing. And yet, even with my own comfort with my discomfort, these people aren't me, not totally, and not in some of their worst behavior. So I get the feeling, and I can see what it looks like, and I can feel it, but that doesn't mean it is, or was, me, and so from that perspective, I am removed from it, not unlike the characters themselves and in that way it's easier to write about.
SP: My absolute favorite story in Sex and Death is "Dead or Alive." Even though the subject matter isn't exactly something that I can relate to, I think it effected me because it felt so deeply personal. Is there any truth to this story? And, for that matter, how much truth winds up in your fiction?


BT: I love that you dig it, it is the only piece that wasn't part of the dreamy mode I was in when so many of the pieces were written, and I didn't engage in any retrofitting. It just felt like a centerpiece sort of piece that captured the appropriate overarching beats and threads, but in a way more visceral sense. That is a visceral age though, and I felt such intense longing then, and was always on the make, like always, and in that way it is very personal, with some nuggets of truth. But all my fiction has at least a nugget of truth, it's how those nuggets evolve and play out and mash into each other, the fantasy and fears and confusions and the ways I allow them to breathe where they become fiction. 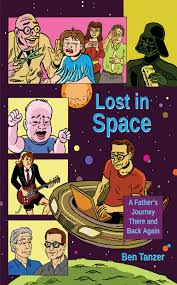 SP: Unless I missed something somewhere, I'm still not sure how the ice cream cones on the fence cover relate to either sex, death or the story collection. Care to explain?
BT: I see it as something akin to a quashing of innocence, something sad and full of loss, and not quite real, but right there, intimate and confounding, striking and visual, like sex, and death, or at least my experience with them.


SP: You always seem to have something coming out- a collection, an article- or you're participating in literary events. You also run your own book review blog and podcast (and many other things as well). How important is it to be part of a literary community? And does all of this involvement effect your writing positively or negatively?
BT: It's important for me to be part of something, anything, and not because writing is lonely, because that is not my experience, writing is just one part, sometimes the best part, of a very full day, but that's the thing, I want a full life, doing cool shit, meeting people, especially writers, but comedians and artists and changemakers too - creating, running around, and consuming everything possible, trying to give back, support people, maybe transform lives, mine included. And so being part of the lit community provides all of that, which for me is a blessing. Now does it effect the writing positively or negatively, I don't know, but it makes me happier and feel alive, and all of that's definitely a positive.
SP: And to pass along the love- what are three upcoming novel or collection releases that you're particularly excited about?


BT: So many Post, you can't believe it. Or maybe you can. Anyway, Single Stroke Seven by Lavinia Ludlow, The History of Great Things by Elizabeth Crane and The Telling by Zoe Zolbrod. 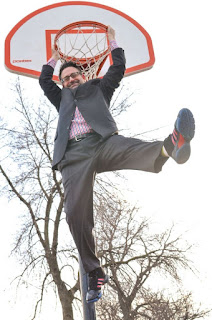 So many thanks to Ben Tanzer for coming by, keeping it real and infusing all of his crazy energy into what otherwise might be a very dull and different literary scene. :) Check out Sex and Death, Lost in Space, The New York Stories and Tanzer's many other collections and be sure to stop by This Blog Will Change Your Life- his rockin' blog/podcast/website as well. Cheers and happy reading!
Posted by Steph Post at 11:30 AM