Interview with Giano Cromley, author of What We Build Upon the Ruins

Today, I bring you an interview with Giano Cromley, author of the short story collection What We Build Upon the Ruins. Framed by three interlinking stories focused on one family's reckoning with loss and struggle with grief, the tales in this collection are poignant, haunting and utterly captivating. Short story collections are often hit or miss, but What We Build Upon the Ruins swings for the fences and brings it home. Read on as Cromley and I discuss writing about loss, crafting messy characters and how short stories are more like poems than novels. 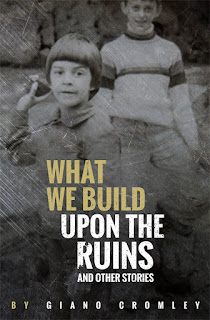 Steph Post: The three stories that frame the collection- "What We Build Upon the Ruins," "Human Remains," and "The Physics of Floating"- all tell a continuing story centering on a family's experience of building a birchbark canoe as a means of healing their shared grief. I'm curious as to the development of this triptych. Was this originally one long story that was broken up or was it written as a deliberate series over a span time? And what was the need for breaking the story into separate, individual pieces?

Giano Cromley: The canoe stories started out as just a single story I wanted to tell with no idea what it was going to be when it finally grew up. As I got further into it, I started to realize it was going to fall into that weird limbo state of too-short-to-be-a-novel-too-long-to-be-a-short-story. I was also in the process of putting together a collection at the time, so I figured maybe I could write about this family but have it be three distinct, separate stories. One of my favorite collections, The Watch, by Rick Bass, does something similar. The first story introduces a couple characters and seemingly resolves itself. Then, about halfway through the collection, you come across another story with the same characters and then again at the end. Those stories aren't as narratively linear as mine are, but it's like getting a surprise visit from some old friends when you're reading that book and you come across them. So once I had that model in mind, I set about writing the rest of this family's story in three separate pieces. It ended up being liberating, in a way, because I was free to make each piece about a different person in the family, with different ideas and themes to explore.

GC: I'm a huge fan of the band Cloud Cult, and the song it's from, "When Water Comes to Life," was written as an ode to the lead singer's deceased son -- almost as a way to comfort him in the afterlife. As I thought about those lines, though, I realized they could be equally applicable to those of us who survive a tragedy. Finding a way to go on is the only choice we have, but it alters us, changes who we are in some important and essential ways. The idea of cutting yourself open to see if that essential you-ness is still there struck me as being a pretty good depiction of what it's like for the ones who come out the other side of tragedy.

SP: All of the stories, in some form or fashion, are concerned with themes of loss and/or transformation. Grief, death and loneliness weave through the pages, but there are also beautiful moments of rebirth. What draws you to writing about such heavy subjects? Are these themes prevalent in all your work, or just in the specific stories chosen for What We Build Upon the Ruins?

GC: I don't think I'm a particularly dark person. But I understand the ways that loss and loneliness make their way into every nook and cranny of our lives. To me, there's comfort, maybe even honor, in acknowledging that fact, recognizing it, tipping your cap, and then finding a way to keep living. That's what this collection is primarily concerned with: Carrying on -- sometimes unsuccessfully, to be sure, but always clawing forward. I would say my short stories tend to dwell on these ideas a little more, whereas in my longer fiction I tend to use humor as a way to confront those parts of life.

SP: One of the things I so love about your stories is that they are filled with messy, complicated characters who sometimes disappoint the reader, but ultimately ring remarkably true. How do you go about writing such authentic characters and to bringing them so fully realized to the page?

GC: First of all, thanks! That's about the nicest compliment a writer can get. I like to observe people. And I think I've got an ear for an oddly emphasized syllable or a striking word choice or a response that's not really a response. I see it as the job of a writer to pick up on those things, interpret them, and use them in a way that gives meaning to the mundane. But, at the end of the day, I think a good part of fiction writing is like being a magician. You want to get so good at pulling off your tricks that the artifice behind them is unrecognizable. That's when you've really succeeded.

SP: Something that drove me crazy (in a good way!), however, about these stories is that as soon as I would fall in love with the characters, the story would be over. I found this particularly true of my favorite story, "Boy in the Bubble." I wanted the story to keep going- not because it was unfinished in any way, but because I fell so hard for Max and his parents that I didn't want to close the story on them. Have you ever considered turning one of your stories into a novel?

GC: You know, I've never really felt a desire to go back to any of my short stories with the intention of expanding them. A teacher of mine once said that short stories have a lot more in common with poems than they do with novels. Which I sincerely believe. And with the characters in my short stories, I usually leave them right where I want them to be once I finish a story. One of the things I like to ask my lit students when we read "The Lady with the Dog" is why Chekhov decided to end the story where he did? Why didn't he tell us how Anna and Gurov resolved their dilemma? Inevitably, they come back at me with, "Because he wanted us to imagine our own ending." Which isn't really the answer I'm looking for. He did it because they've made the decision to do something about their condition, to change it -- and that, right there, is the most important thing. How they go about changing their condition is far less important than the decision to actually do it.

SP: I always want to pay it forward, so I'd love to hear about some of the authors who have inspired you and your work. Is there any author in particular that has influenced you or who you'd like to give a shout-out to here?

GC: As I said earlier, the collection The Watch, by Rick Bass, certainly had a hand in how I chose to assemble this collection. For short stories, I'd have to say my main influences would be Joy Williams, Richard Ford, and William Trevor. Picking up their books recharges my literary batteries. A couple hours immersed in their work, and I'm ready to write again. 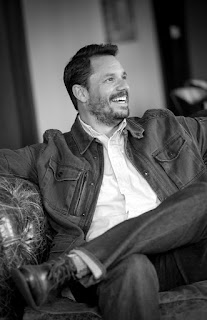 Thanks so much to Giano Cromley for stopping by. What We Build Upon the Ruins hit shelves yesterday, so be sure to pick up a copy! Happy Reading...