Today, I'm excited to finally bring you a non-fiction author! Ben Montgomery is the author of The Leper Spy: The Story of an Unlikely Hero of World War II as well as Grandma Gatewood's Walk and the forthcoming The Man Who Walked Backward. His captivating biographies focus on little known players who made interesting, and important, contributions to history and deserve a closer look. Happy Reading! 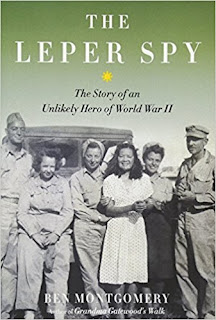 "Yet odds are you have never heard of Joey Guerrero, as she was known (along with several other names). Until a few years ago, neither had Ben Montgomery, but his new book, The Leper Spy: The Story of an Unlikely Hero of World War II, brings her extraordinary life back into the light".  -Colette Bancroft, Tampa Bay Times

I can say with certainty that it’s not my best piece of writing, but I have a short story in mind. When I worked the Saturday shift in the Tampa newsroom of the St. Petersburg Times, I was often assigned coverage of fairly lame press events -- “filler,” as we called it, for the Sunday paper. One such assignment was to cover a photo session for the Heart Gallery, the outstanding non-profit that pairs professional photographers with foster children in need of permanent homes. The photo pros make nice portraits of children which are later displayed in shopping malls to tug at the heartstrings of potential parents. When I arrived, several television news crews were at the event and it made for a sort of awkward situation, the orphaned children in line to be photographed, then interviewed for the TV news. Anyways, I noticed a little girl in a cheap dress standing alone and I decided to try to skip the middleman and just write an advertisement for this one little girl. In twenty years of often heady newspaper work, this 300-word story drew the most phone calls.

TAMPA - She can spell cat.

She has blue eyes and shoulder-length hair the color of Florida sand. She tucks it behind her ears.

She likes it when people paint her toenails pink.

She can hopscotch with ease, and jump two jump-ropes at the same time while chanting a rhyme called "Ice Cream."

She is quiet. She crosses her legs when she sits.

She has a baby doll. She named it Tianna, because it sounds pretty.

She rides a pink and purple bicycle, likes dogs and cats.

She paints with watercolors.

She is a cheerleader at the city park, but she can't do the splits yet. She shakes pompoms and shouts, "Pump it up!"

She's not great at basketball or baseball, but she would play.

She wants to be a doctor for babies when she grows up, "because it helps people."

When she is asked what the perfect mother would be like, she says, "My mom, Heather."

She wore a black dress with pink hearts on Saturday to the Botanical Gardens at the University of South Florida.

She wanted to look pretty when they took her picture for the Heart Gallery, a moving display of professionally done photographs of children who want to be adopted. She has been in foster care for more than two years, bouncing from home to home, none of them hers.

Her name is Alexis. She would like a family.


What was the best review you ever received?

One of the very first, from Bill Perkins at Paste Magazine. I owe him for affirming the way I felt about the work. I still read it when I’m feeling blue.

Amazon reviewer Julie A. Hankins, one star: “Can't think of one thing I like about this book.”


Do you have a set routine as a writer?

When I worked at the newspaper, I would come home around six, eat dinner, put my kids in bed around 8, then retreat to my writing shed to work from 8:30 p.m. until 1 or 2 a.m. If I had a good day, I would reward myself with a couple of glasses of wine and go to sleep, then do it again the next day. Since I left the Times in October, my routine has been in a state of flux, but I have incredible amounts of creative energy. Focusing exclusively on the book has allowed me to write from about 6 a.m. until 8 p.m., and the only thing that’s routine is that I try to take one long walk in the morning and one in the afternoon. I use these walks to think about particular problems in the work -- pacing, the rhythm of a sentence, the opening line of a chapter, the right tone for a cliffhanger, etc.

My writing schedule for all three books -- each of them spanning about fourteen months from contract to delivery -- has been about the same. I do the reporting and research for about ten months, then try to leave about ninety days to write. I mark up a wall calendar with daily word-count goals, aiming for a thousand words a day. My three manuscripts each required 70,000 words, so the idea is that I’ll hit the word count in seventy days, leaving around a month to revise and get feedback from trusted friends. I write in order, so I can’t skip around in the text like some writers. I must admit there are days when I work hard and only have 500 good words on the page, but other days I just go like made and chip off 2,500.

That pace has worked pretty well for me, though I’ve received short extensions for all three books because I can always use a little more time to read and revise.

Hard to say, but maybe this three-word phrase: “Butt in seat.” I like it for its simplicity, and actually sitting down to do the work -- even if you’re just staring at the screen -- is the most important part of the process, one which a million people who have book ideas can somehow never achieve.


There’s no one book. I’m lately inspired by Gilbert King’s detailed recreation in The Devil in the Grove, the pace and repetition of David Finkel’s The Good Soldiers and Thank You for Your Service, the depth of internal emotion in John Williams’ novel Stoner, the poetic historical exploration in Beth Macy’s Truevine, but I find little nuggets of inspiration everywhere. Sometimes I start a writing session by picking a book from the shelf at random and flipping around until I find an enviable sentence, and I’ll read it a dozen times and let it guide me onto my own page. That’s integral to my process.