Book Bites: Nicole Tong, author of How to Prove a Theory

I'm so excited today to be able to bring a poet over for a Book Bites interview! Nicole Tong, whose debut collection How to Prove a Theory just hit shelves this past fall is not only a brilliant poet and writer, but human being as well and I'm honored to have met her as a freshman at Davidson College and gone through the years with her there. Tong is a poet's poet, one who truly understands language in a visceral way and brings that experience to the reader in a series of striking, startling awakenings on the page. 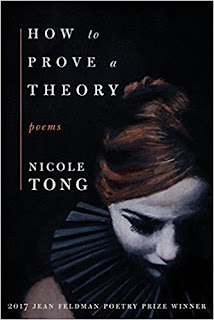 "Balanced between before and after, breathes Nicole Foreman Tong's How to Prove a Theory, a collection of poems impeccably made. If poetry can work as solace in the face of loss, these poems are the proof. Quite simply, this is a beautiful debut." -- Sally Keith, author of River House
How do you handle writer’s block?

Because of my teaching load (16-20 credits a semester), I don’t get to write as frequently as I have good ideas, so I rarely experience writer’s block. I do simmer over how to best address something I’m contending with, and when this happens, I usually go for a run or a long hike. I voice record lines over and over until I think I have a way into music of the poem.

I started running when I turned 30, and when I started, I couldn’t run a mile. Several years later people closest to me started getting sick including my dad and my brother-in-law who lived alone in North Carolina. Running was a coping strategy. I couldn’t always bring myself to sit at the computer and come up with a polished idea of how this series of losses made me feel, yet I could, if I ran long enough, find some degree of music or some line that stuck. Before I knew it, I was spending whole days hiking or running. The goal was never to become an ultramarathoner, but that’s what happened in a quest for a finished collection.
In the book, you can see examples of poems that began as voice memos because the lines are markedly shorter. “Marathon” is one example.

“Chinook Theory,” which is a poem for my dad; it’s also one of the newest. I wrote it in one pass at the Virginia Center for the Creative Arts just before I submitted the book to contests. We had a difficult relationship, but writing a poem like that one helped me reconcile the difference between the father I knew growing up, the combat veteran with PTSD, and the man who died with the women of in his life circled around him.

By early summer 2015, he was very weak. He needed help doing everything at the end, but when the hospice nurse assured him the morphine would keep away the pain at the end of his life, he asked if he could have something local because, in his words, he “want[ed] to feel it coming.” He was the toughest person I’ve ever met.

And, I’ll note, he would have loved being the star of another poem. In 2007, I read “And the Place Was Water” at my MFA graduation reading. He had had a stroke the season before. It took him all winter and spring to walk so that he didn’t need a wheelchair for that event. The poem was printed on the program, and he read ahead as I read aloud:

He started to cry audibly, and then I started to cry. The whole auditorium was in tears by the end (if I even made it to the end). I don’t think he knew poems could speak about life as it is and not as we want it to be. I think he thought I was spending my time in fields writing about flowers.

Did the collection have any alternate titles?

a. And the Place Was Water

The subtitle for Lorine Niedecker’s “Paean to Place.” In its earliest stage, the book was my MFA thesis, and this was the strongest poem with the surest footing. I had a catastrophic flood in 2013. The poet Marilyn Chin would say in this case and in so many others, “The muse knows.”

b. Theory of Everything

I was reading about the quest for a unified field theory starting with Richard Feynman, Stephen Hawking, and Brian Greene. Then one summer afternoon I went to the movies, and I saw a trailer for a film with the same name. I think you could have heard my reaction throughout the building, but in the end and given the ways in which the collection evolved especially in the months before publication, I’m happy I had to keep pushing the title.

What single book has been the most influential to you as a writer?

The first book of contemporary poetry I read was James Kimbrell’s The Gatehouse Heaven. This was one of twelve books I read in my first semester freshman English class at Davidson College. I could probably recite the long title poem by this point. This book (along with the Catholic hymns and prayers of my childhood) is the music I’ve carried with me the longest. I can find the echoes of and nods to James Kimbrell though I couldn’t see them while writing. I see them very clearly now. I owe this poet and a few others a debt of gratitude for life as I know it.

What do you wish more readers would ask you about?

The story of Camp Lejeune in “Let the Dead Bury Their Own.” This water contamination event really happened. It, along with Agent Orange exposure, lead to my dad’s death. It may be why I don’t have children. I spent the first thirty days of my life in the NICU of a base hospital, so my first baths were in contaminated water. My first bottles were poisonous. Not only did the government fail to protect those charged with protecting all of us, but it knowingly harmed them by not closing contaminated wells sooner and by covering up the magnitude of the damage to begin with. These are stories rarely in the news, but when I hear of events like those in Flint and Puerto Rico, my brain fast forwards twenty or thirty years. I imagine how our inaction will ultimately affect generations.