Today, I'm lucky enough to bring you an interview with Robert James Russell, a literary Jack-of-all-Trades, who just so happens to do incredible work with all of those trades. Author of the novellas Sea of Trees and Mesilla, Russell is also the force behind Midwestern Gothic and Cheap Pop. Oh, and then he's also a talented artist and highly honored short fiction and non-fiction writer and poet. All around, he's a kick-ass writer and literary citizen and I'm thrilled to have him stop to give his take on the necessity of setting, feral camels, Faulkner, and what it truly means to find success as a creative person. 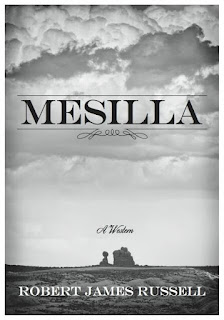 If McCarthy and Emerson collaborated on a novella, solicited Herman Hesse to edit it, Jim Jarmusch to film it, and Leonard Cohen to do the score, the result might capture some of the elusive seductiveness of Russell’s work.” —Matthew Gavin Frank, author of Preparing the Ghost

In your eyes, what does it mean to be a “successful” writer?

Being successful, to me, is, at its heart, a simple thing: to be true to my vision, to write stories I want to tell, stories I think need to be told. Success is, then, not feeling pressure to conform.

But, see, with writing, it’s so easy to compare yourself to other people, especially if you work in a similar genre or have a comparable style—this is doubly so with writers who use social media and are actively involved in the community. I think it’s important then to define what “success” means and that what you get out of it might be something completely different than writer X, Y, or Z. For me, this is a constant battle—reminding myself what I need to be happy and content with my work. I’ve been fortunate to have a couple novellas published; I write the things I want to write, and publishers have decided they were good enough to take on. That, alone—that my words have been shared, that editors have said Yes to my work when there are so many compelling writers and stories out there—is success. At the end of the day, being happy with your creation and your vision has to be enough: even if you are putting down a dozen words a day, those are words that didn’t exist the day before, words you are literally breathing into being that no one else has. That is a miraculous, marvelous thing. That is success.


What was something interesting you learned while researching that didn’t make it into one of your books?

For Mesilla, it was a lot of stuff, to be honest: I love the history of the American West (while recognizing how problematic it has been to mythologize it in popular culture). And yet, I get swept up in all the little nooks and crannies that aren’t readily talked or written about. I had a scene I wanted to put in about feral camels in the Southwest United States—they were part of the very real United States Camel Corp, an ill-fated experiment to import camels to be used as pack animals in Texas and New Mexico territories. Once the Civil War hit, the Corp was disbanded and the camels either were sold or escaped. I loved the idea of my characters coming into contact with them, even in passing, this romantic notion that the camels have flourished out here in the wilds, no longer bothered by humans. I also researched a lot about wild horses, how they were captured in the Old West, and Mustangers especially, specialized hunters whose job it was to find and capture wild mustangs. It was a grueling, dangerous job, and there was a trick called creasing that many of them employed. Creasing involved firing a shot—Oh, you had to be a crack shot!—and piercing the mustang’s neck just below the skin in an exact spot. An inch in the wrong direction and the horse would be killed instantly, but if done right, the horse would be temporarily paralyzed, knocked down, so the mustangers could ride up and collect it. It was a brazen, hazardous, cruel thing that only worked a small percentage of the time—this, to me, exemplifies the foolhardy spirit of The West, the brash pioneer spirit of expansion.

Neither of these made it into the novella, but I loved learning about them and am hoping to incorporate them into future work.

Goodness, perhaps it’s cliché at this point, but the advice that has resonated most with me as a writer comes from Elmore Leonard: Try to leave out the part that readers tend to skip. For me, this has been a creed: write effectively and don’t lose your audience. It’s taught me to be efficient, to tell the story in 100 words instead of 1,000, and to be able to anticipate the reader’s needs. How can I lay out necessary exposition while not going overboard, and then jump to a thrilling, terrifying scene where the antagonist is closing in and you don’t know what’s about to happen? The way I read this advice, it is constantly about teetering: give just enough, dangle, and then go in the completely other direction for a bit, then back again, and back again. I want the narrative, even in a short literary story, to be twisty, to keep your interest, to give you just enough to help outline the basics and ground rules of the world, but without giving it all away. The best stories, the absolute best work, I think, allows our minds to make a narrative our own. I am desperate to make sure that there’s no parts to skip—that it all means something in the end.


How important is the setting in your novella?

Critical—I often start stories based on settings and landscapes; in real life, I’m captivated by landscapes, by lush forests and wild low deserts and everything in-between. This is where my imagination is at its most raw: I touch the bark of a tree, imagine the possibilities of my characters hiking through these same sceneries, and start to build narratives. How are they here? Why? Who’s after them and how can I make it interesting? For Mesilla, I wanted to write a story in the desert set during the Civil War featuring a deserter. It all started with this basic concept, set in the New Mexico Territory, this lawless, wild place. And then, I answered my own questions: It made it inherently more interesting, I thought, to start the story in media res, where our hero—anti-hero, really—is already gravely wounded, on the run from a mysterious figure relentlessly hunting him down, having to navigate a fairly inhospitable tract of land, trying, desperately, just to survive. To me, right there…that was the story, and it was completely dependent on the setting. It couldn’t take place in California or Alaska—it needed to be after the Battle of Glorietta Pass, in a place that was just so unknown to most Americans, a place to get lost in. That, too, represents one of the themes of the book: Is it possible to ignore our past and start over? What do we carry with us, whether we know it or not?

In my new book, which takes place in northern Michigan in 1943, it was essential to set it in a remote place, removed from the world. I wanted to explore the effects of World War II on a small, detached community, how terrifying that might be, not knowing the extent of the terror in the world, its reach. I had in my mind the lavish forests of northern Michigan, the bucolic beauty unrivaled, far as I’m concerned, and a horse farm there, at the edge of a large, dark, dangerous wood. It was the first thing I imagined when laying out the book, and the central focus of the narrative. I do not want my stories to exist in a vacuum—I want them taking place somewhere specific, and only that place. Maybe it’s a call back to when I was a kid, imagining the trees in my neighborhood as sleeping, towering giants, power lines as portals to other worlds, but landscape is where it all starts: It’s what inspires and awes and terrifies. So, yes, I want the reader to look at it Mesilla, any of my work, and say: Yes, it could only be set right here, at this time, in this space. It couldn’t be anything else.

I am continually finding books that influence me—I think it’s how we grow as writers, to learn and push ourselves to do better. But the one book I come back to that showed me how to expand my ideas of what a novel could be, that it could be anything we imagine it to be, is Faulkner’s As I Lay Dying. Oh, it was a marvelous discovery: he completely tore apart everything I thought a novel had to be, created his own, uniquely American world in a rather slim book. I loved that level of creation and creativity, how dependent on place it is to establish identities and relationships and the main narrative arc, and then how many rabbit holes it goes down to further dissect each of its characters’ psyches and inspirations and fears. Even now, writing a book that is completely contrary to the tone and style of As I Lay Dying, I think about it often: How can I use the world I’m creating in the book, around the characters, to help tell their story? How can I keep it interesting? How can I do something, no matter how small, that no one’s seen before? It pushes me, always pushes me, to be thinking about these things as I craft my narrative in ways, I hope, will interest the reader.