Punk rock and Alzheimer's aren't two things that usually go together. (Okay, actually, when you think about, they do sort of go together, and after reading the book, you'll see why even more so...) Yet, Frank Morelli, author of the coming-of-age YA novel No Sad Songs, deftly interweaves the two, as well as grief, alcoholism and, oh yeah, being a typical teenaged boy. Though No Sad Songs tackles some heavy issues, it's also hilarious and one of those rare books that truly captures the authenticity of a teen's outlooks and experiences, while still resonating with adults. 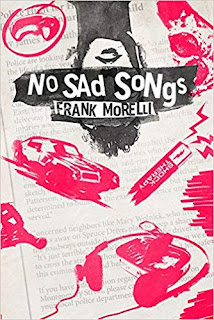 "This coming-of-age tale is a must for any YA collection." --School Library Journal (starred review)

Which character in the novel gave you the most trouble?

Strangely enough, the toughest character to write was my narrator, Gabe LoScuda. It’s weird because he’s the character most like me in the story, but I think that sometimes made me want to lean towards making him too likeable. That’s also kind of a weird statement to make, but the further I got into Gabe’s story the more I started to feel his struggle internally. I felt there was an authenticity problem to have Gabe carry all the weight of his grandfather’s illness and the loss of his parents without having a sizeable chip on his shoulder. I started to feel like I wanted him to be more real. Less of a superhero and more of a standard teenager who just happens to be performing heroic tasks. In subsequent drafts I went back and roughed him up a bit. Made him more abrasive in places and therefore more susceptible to experiencing growth and change. The challenge in that was going as close to the line as I could go without making Gabe lose all of his support with the reader.

So many. At the top of the list is Stephen King. I grew up reading his books and then spending the better part of the weeks following sleeping with the light on. He’s amazing. He also happens to be living my life in an alternate reality. Imagine living in Maine. Waking up to writing everyday. Publishing new titles with roughly the same speed and efficiency as a Ford production line. It sounds like heaven to me. On a side note, I keep tweeting at Mr. King with promises of providing my skills as the ringer on his all-author softball team. Curiously, he has yet to respond. I think it might be a collective bargaining thing. He’ll come around.

That’s easy. It’s an absolutely terrible piece of creative nonfiction (I had no idea of that at the time, btw) that I wrote at the beginning of ninth grade. I called it “Lost on the Slopes” because, get this, it chronicled the first time I went skiing and, you guessed it, got lost out there on the trails. I still have it sitting on my shelf next to all of my slightly more professional writing. Every time I read it, two things happen: 1) I cringe and begin to doubt every other word I’ve written since and 2) I smile, because this was the first piece of writing I ever had the courage to share with other people. “Lost on the Slopes” will never go down in the annals of literary history (and, no, I will not share it with you...ever!), but it was my gateway. It made me want to create again and again, and it gave me the confidence to begin completing the basic transaction of literature, which is to find a worthy consumer.

Serving as the ringer on Stephen King’s softball team would be a good start. No. To be totally honest, I measure writing success on a micro instead of a macro level. I don’t think it’s healthy to obsess over what your novel might become or to compare book rankings to find your worth. I feel successful when I create a sound plan for a day of writing and then execute it. If I do that enough times in a row, suddenly there’s a book. If I’m happy with what I’ve created at that point, then I’m a success. I don’t know, people might tell me that’s a super low bar to meet, but I don’t see it that way. If you’re invested in your writing and you believe in your story, the most difficult reader to satisfy will always be yourself.

No Sad Songs has received many good review from some significant reviewers. I won’t sit here and tell you that receiving praise from the industry standards wasn’t both satisfying and relieving. It was. But my favorite review came on a classroom visit right here in Greensboro, just a stone’s skip from my front door. It was an oral review, and the young man who gave it is currently helping his single father care for his grandmother, who is suffering from Alzheimer’s. To hear his story and then listen to him make comparisons to the experiences of my main character told me I had truly created a work that was able to reach the right person at the right time in his life. To me, that’s why we write the books.

The worst review? Ouch. That came from a beta reader shortly after I’d written the first draft. She said something like, “Cute story, but it doesn’t have the depth to be a published novel.” At the time it felt like the literary reviewer’s equivalent of “Cool story, bruh.” But it was ultimately helpful and led me to expand on the personal essay device I wound up using throughout the story. You never know. Sometimes a bad review can be worth a thousand good ones.