If you read crime fiction or mysteries (and haven't been living under a rock these past few years), then you know Rob Hart. With his break-out news about next summer's The Warehouse, his Anthony nominations, his workshops over at LitReactor, his forthcoming Food-Noir collection (stories of "culinary crime") or, you know, the five novels he's published in the past four years, Rob Hart has been more than a little busy. Potter's Field, the fifth and final installment in his Ash McKenna series that began back with Hart's debut New Yorked, hit shelves in July and is, of course, garnering a lot of buzz. Lucky for you, Rob Hart took a breather and stopped by to answer a few quick questions. Enjoy! 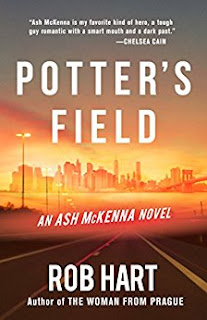 “Brings the series to a satisfying close...gripping action sequences...Hart has a fine command of wiseguy comments, a modern take on the noir crime idiom, and enough vulnerability in his protagonist to make the reader sorry to see the last of Ash.” ―Publishers Weekly
What drew you to the genre you write in?

I like crime fiction because you're generally dealing with people at their rock bottom, which is when you really get the measure of a person.

A few! The biggest was a novel called Not Yet Lost. It was a horror story with this weird meta-narrative and it might have been a bit too ambitious--I don't think I was ready to write it. I got up to 70k words and just sort of fizzed out, so I put it away. I may come back to it at some point, even to scrap it for parts.

I wrote a story called "Creampuff" that was in the Unloaded anthology, and will be in my collection food-noir, Take-Out, coming out in January. Out of all the stories I've written it's my favorite. Not even really sure why. Just do. But I'm also really excited for people to read The Warehouse. It's the closest I've gotten to the kind of writer I want to be.

The best and worst were for my first novel, New Yorked. I was so afraid of what my mom would think, because here was this character roughly my age who was a heavy drinker and drug user and just an utter idiot, and after she read it she said, "I felt bad for him." And that just really cut to the heart of what I was trying to do. The worst was the person who bought the book and left a one-star review calling it "too New Yorkie."

From Amy Hempel, who is probably the best living short story writer: The biggest mistake young writers make is wanting to publish more than wanting to write well.