I can't tell you how much I love today's Spotlight interview. (okay, I'm telling you- I love it). Not only does E.A. Aymar- author of the thriller The Unrepentant and the 'novel-in-stories' The Night of the Flood anthology, along with Sarah M. Chen and other assorted badasses- bring humor and heart to the sometimes grueling world of writing and publishing, he's got some wonderful advice for you as well. Aymar is yet another reminder why the crime fiction community is the one of the most incredible, supportive bunch of misfits out there. 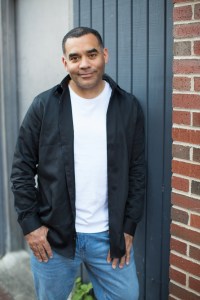 Who: E. A. Aymar
Book: The Unrepentant
Follow! @EAAymar

Has the publishing industry ever made you cry? What did you learn from the experience?

I didn’t cry, but I was overwhelmed when Jennifer Hillier won the Thriller Award for Best Hardcover Novel this year. Jenny’s one of my closest friends, and I love her and I love her books. I know how much Jar of Hearts meant to her, and I know that she’s never really seen herself as an “award-winning writer.” She knows her gifts and strengths, but didn’t see that in her future.

So to hear that Jenny had won that award, and to watch the video of her stunned acceptance speech (I couldn’t go to ThrillerFest this year), meant the world to me. Jenny works hard, and to see her work pay off, particularly in a way she couldn’t imagine, is inspiring. It’s proof that the work, while certainly its own reward, can often lead to other wonderful moments. And many of those moments are beautifully unpredictable.

I know I should be talking about my own experiences here, but that award moved me, and I’ve wanted to write about it. I’m okay putting the spotlight on someone else.

BUT NOW BACK TO ME ME ME.

I think doubt is common to writers (and all artists). We have to stay immersed in our field, which means reading a lot of other writers, and there are a lot of good writers out there. Especially right now. Nothing makes you doubt yourself like reading something moving, and wondering if readers have that same reaction to your work.

And, for me, I lost that type of confidence in my writing. My first two novels came out and were forgotten – barely anyone read them, and no one reviewed them. Because of that, I was hard on myself, and I assumed they just weren’t very good. And that’s a terrible thing to feel.

Although that was a damaging mindset, it was, in some ways, helpful. It made me work harder. When The Unrepentant was published earlier this year, I’d finally written a book that people were reading and enjoying, and it was being reviewed and receiving praise from venues I’d never expected to be in. And that was enormously gratifying.

Still, though, I hadn’t realized how damaging my doubt had been until Murder and Mayhem in Chicago. I try to go to a few writing conferences a year, and I’d always heard good things about MMC (and it is a great conference). I was sitting at the bar with Jess Lourey and Susanna Calkins and Lori Rader Day and Eric Beetner and other writers I hold in high regard. And I quietly realized how happy I was.

I was happy because I didn’t feel like a fraud.

I felt like I belonged, and through all the years of book store events and conferences and festivals and readings I’d been lucky to participate in, I’d never felt like that before.

I write all that to say that doubt is healthy. Every writer should be skeptical of his or her work. Confidence often verges on foolhardy.

But, at the same time, don’t let doubt blind you. Or take away from the joy at what you’ve done.

I’ve been thinking about this a lot recently, and I’m not sure how to say the answer. I think the worst reason to become an author is something along the lines of wanting to get published. I mean, that’s why we all write on a professional level, but I’d caution specifically against “haste.”

I was talking to a writer a few years ago and she was asking me for advice – she’d completed a novel, and was considering self-publishing it. I don’t have anything against self-publishing; it’s not the route I chose, but it’s the right choice for others. I told her about my path of finding an agent, and then that agent finding a publisher, and how long it took (I started writing seriously in 1997 and my first novel was published in 2013). And she said, frankly, she wasn’t interested in going through years of rejections when she knows her novel’s already good.

That attitude drives me crazy. There’s a lot that can be said critically and fairly about the gatekeepers in publishing – I get that. But rejection is part of the process of writing. It’s part of art. If you’re not willing to face rejection, then you’re simply in the wrong field. It’s one of the ways you improve as a writer, and I can’t help but feel that someone who writes a book, and refuses to accept criticism, is faking the funk. Writing a book should not be your achievement. The achievement is writing a good book. And criticism is one of the ways to learn the difference between the two.

As for the best reason to become a writer, it’s the money and the groupies. PANTIES ON THE STAGE, BABY. Oh, and also the joy of craft and bringing excitement to others. But mainly the money and stage thing.


What advice do wish someone had given you when just started out as a writer/author?

I didn’t go through an MFA program, but I did do a number of workshops at the MFA level. And the college I went to (George Mason University, home of the 2006 Men’s Basketball Final Four Patriots), boasts one of the best writing programs in the country – Art Taylor, Tara Laskowski, John Copenhaver, and Laura Ellen Scott are among the talented writers associated with it. I was taught a lot about craft, and I read some fantastic work, but I was never taught the business of writing. Maybe students in MFA programs are taught that now, but I’ve talked to a lot of MFA grads who aren’t. And wish they had.

When I started to take my writing seriously, I had hopes of writing a literary novel, mainly because that was all I’d read. I had no real conception of genres, because an appreciation of genre had been beaten out of me. This wasn’t the fault of any of the schools I studied at in the D.C. area, incidentally; rather, the mentors I chose to study under had little patience for commercial fiction.

It took me a long time to realize that genre fiction wasn’t lacking in comparison to literary fiction, and to understand the importance of writing for an audience. Once I realized that you could do those things, and still aspire to string together some lovely sentences, I became a better writer.

In college, you’re taught to not write like John Grisham. But any agent or editor would kill for the next John Grisham. Which isn’t to say that’s how you should write, but it’s absolutely something any aspiring writer should realize. And I wish I had much earlier.


If you were being shipped to a deserted island and were only allowed to bring one book, what would it be? Why? How hard would it be to choose?

Oh man, it’d be impossible to choose! But that’s a fun question and I want to answer it.

The book that comes to mind is one of my favorites – William Faulkner’s The Wild Palms. That was a life-changing book for me. The ending just tore me up, like little knives chopping my insides to bits. I’ve re-read that book several times, and I absolutely want to re-read it again. And the desert island thing (because I assume it doesn’t offer WiFi) would be a pretty good opportunity.

The other thing is…I’ve read a lot of Faulkner, and I’m not sure I ever truly “got” any of his books. He’s a difficult read, but an engrossing one. Even when I’m not sure what’s happening, I can appreciate the beauty of his prose. So this would be a good chance to finally sit down, crack open a coconut, and do my best to completely absorb that novel, and let it absorb me.