I'm not going to lie- it's been a very busy week. I've been buried in the draft of one book, revealed the cover of another and, of course, there were the usual chicken/turkey/dog antics to round it all out. But it's Friday and that means it's time for another Author Spotlight!

Today, the light is shining on Marlene Adelstein- an author I just recently met, but whose debut, Sophie Last Seen- a psychological thriller that explores the spiral effects of grief, madness, loss and perception- is definitely making some waves. 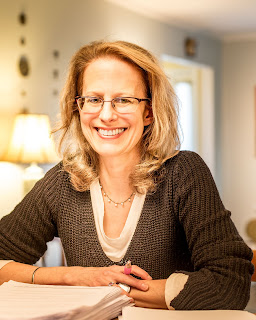 I doubt myself often. It comes and goes in waves. Now that my novel is out and I’ve gotten some really good feedback with people loving the book, it’s given me a nice boost of confidence. But I’m also working on new material and the doubts and insecurities are always there, creeping, crawling under the surface. I try to step back, take a breath and tell myself that I’ve been doing this writing business for a very long time. I do know what I’m doing; it just may take a while to get to where I want to be with a project. Patience is key!

Who says I don’t lavish them with attention? During the course of writing my novel, I had two chocolate labs at different times and currently a cat who recently came into my life. I’m not so sure my pets spend much time thinking about me or my writing time but if they did, I believe they’d think thanks for the quiet time so I can take these long naps near you. My dogs were always huge but wonderful distractions for me. I procrastinated big-time lavishing tons of attention on them, cuddling, talking to, giving treats and taking walks with them. So I’m pretty sure my animal companions never minded when I finally did sit at my desk and get to writing. They seemed quite happy and content just to be near me and both dogs were professional snoozers as is the new cat. Both of those dogs are now gone and are missed terribly!

I used to write screenplays and I worked in the movie industry as a film development executive for a number of top Hollywood producers for many years. So the idea of my book possibly being a film was never far from my mind. My novel is definitely filmic; I envision everything I write as a movie unfolding before my eyes. So it’s been no surprise when most readers say to me they can picture my book as a movie. I can see it as a TV series with some changes or as a feature film. The setting of fictional, small town, Canaan, a hilltown in Western, Massachusetts is vivid. I have a few separate story threads going on at the same time which makes it a natural for a TV series. There are some supernatural elements, a strong woman protagonist who has a dark edge; she takes action, grows and changes. All elements, I think, good for film. I can envision each episode ending on a note of suspense and mystery like the chapters do, and eventually the story threads merge, a mystery solved. All things that I think could make viewers want to binge the episodes. Any film or TV producers out there, get in touch!

What do you prefer to read when you’re in the middle of writing a novel?

Usually I’m reading non-fiction books for research about various topics pertaining to my story. During the writing of Sophie Last Seen, I read books on grieving and in particular complicated grief,  gifted and ‘spirited’ children, and lots about birds and bird watching. Sometimes I’ll pick up a novel and occasionally a topic or sentence hits me, gives me an idea for my own story and I have to put down the book to go back to my writing. But mostly while I’m writing a novel I find my head is too filled with my own story and characters and non-fiction is easier for me to concentrate on.

Sum up the essence of your latest novel in One Single Word.