Catching Up with Jeff Messick: Author of Knights of the Shield

Today, I'm talking with Jeff Messick, whose novel Knights of the Shield just debuted in July. Read on to find out more about Jeff, his genre-bending book and the many projects he's working on now. 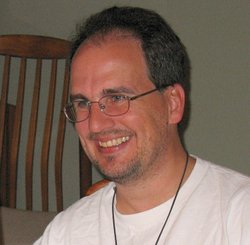 Steph Post: Knights of the Shield is your debut novel and has only been out since July. Now that the book is out, how do you feel? Excited? Relieved? Ready for the next one?

Jeff Messick: A combination of everything, really. I'm really excited to finally be published; it's been a lifelong dream since I was around fifteen. Relieved that I have crossed the finish line and actually completed a project. I am already at work on five more projects, one of which will feature characters from Knights of the Shield in recurring roles for an ongoing series.

SP: Your novel focuses on the characters of two detectives on the hunt for a serial killer, but it's much more than a by-the-book crime thriller. How do you think Knights of the Shield differs from most books in the crime genre?

JF: The crime genre is typically the crime, the detective and the road to capturing the bad guy. Knights is exactly the same, except there's a paranormal twist and solving the crime is not the only journey the protagonist is on. I explore a lot of different relationship types as well, so there's a lot going on in there, more than just the crime.

SP: When you're not writing, you're working in the IT world (I barely know what that means). What got you interested in writing and how do you manage the dual roles of computer guy and published author?

JM: I've been writing since around fifteen, like I said before, but I've been telling stories since I was very young. As a computer guy, there's a lot to do in the workplace and I get it done. When I go home, I put on the writer hat and try to kick out as much as I can. Sometimes it's all crap, so it gets recycled, but sometimes I'm successful. It's tricky balancing all the requirements of fatherhood, husbanding, work and writing, but I do what I can.

SP: The cover of Knights of the Shield is filled with symbolic elements. Can you tell me what is going on with the cover image and what it was like working with a cover artist to design it?

JM: Let me answer that in reverse order. The cover designers at Pandamoon Publishing are first rate. When I saw the cover for Southbound, by Jason Beem, I was in awe. The cover for your novel, A Tree Born Crooked, just fits so well into the style of the book. Working with them on the cover of Knights was sheer joy. The main focus of the cover is a badge wallet that you'll see on nearly any cop show, but the badge holds everything in it. The religious angle, the ghostly ancestor, are both subtle. The colors were the kicker. The colors of good and honor throughout history are gold, blue, and white. The colors on my cover are perfect. The symbolism isn't quite as important as the colors.

SP: Who are some of the authors who have influenced your writing style and who do you like to read who does Not influence your style?

JM: Robert Parker is one of the best detective novelists I've ever read. He crams so much into dialogue, it's uncanny. I like that a lot because I feel it's a lot more active storytelling. Readers feel like they're actually there. That's been a huge influence on me. I absolutely love The Lord of the Rings, all those books are iconic to me. However, I could never write like that.

SP: I have to ask- what's next for you? Do you have another novel you're working on that you give us a glimpse of?

JM: I have five projects working. A paranormal drama about finding what in your life is truly valuable and is a shout out to my great Aunt Dale. She was the creator, writer, and illustrator of Brenda Starr, the comic strip that ran for thirty-plus years in over a hundred papers around the world. My project involves her characters, plus my own. I have an idea for a political thriller involving the first woman president and the plot to kill her. I have the ongoing series idea I mentioned earlier, involving a fallen angel that investigates paranormal activity and is dedicated to maintaining the balance between good and evil. I have a paranormal (see the connections here?) novel of a vampire dealing with being changed against his will and having to deal with a divorce and the possibility of losing his kids, which would be worse to him than losing his soul. And finally, a fantasy (you thought I was going to say paranormal) story about a young man's journey with mind boggling power and the balancing act he must keep between what is right and what is required of him. 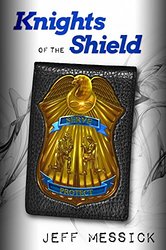 Thanks so much to Jeff Messick for stopping by and be sure to check out Knights of the Shield!
Posted by Steph Post at 2:16 PM