Shaping Memories: A Conversation with Will Boast, Author of Epilogue: A Memoir

Today's interview was a long time coming and, as I'm sure you'll agree, worth every moment of the wait. I read Will Boast's Epilogue: A Memoir last fall and challenged him with some hard-hitting questions. As Epilogue will be released in paperback this week, it's a perfect time to dive back into Boast's story of love, loss, memory, grief and, most essential to the novel, the mysteries and complicated bonds of family. Read on as Boast and I discuss authenticity, writing painful scenes and the complex line between truth and fiction, novel and memoir. 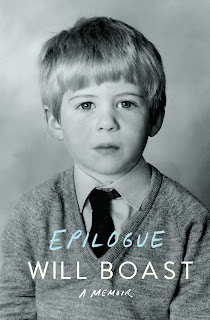 Steph Post: As a fiction writer, I am both fascinated and terrified by the idea of writing a memoir. When I took a memoir writing class in grad school one of the most difficult parts for me was staying true to the facts and not embellishing or derailing events to create a better story. I’m curious how you handled this balance. Were you ever tempted to stretch the truth for the sake of the book? While writing, did you ever struggle with crafting a scene for readers, knowing that you had to both entertain and be authentic?

Will Boast: I hear what you’re saying and absolutely agree. There are some skills that cross over from writing fiction to writing explicit autobiography, but just as many that do not. I actually started Epilogue as a novel, and it took me at least a couple years to realize that, for various reasons, it had to be nonfiction. That was a long process with a lot of hesitations and strange turns into odd hybrids of the two genres. Once I settled on something like memoir (I still consider Epilogue something of a hybrid), I really began to grapple with the subject and the memories. Instead of shaping the material, I had to find its shape, if that makes any sense. I had to think about it all more deeply and more analytically, and to be honest I learned a great deal about my family by moving away from fiction (not that trying it as a novel didn’t help also). Strangely, I found that playing down the dread and joy and confusion of actual experiences tended to make them more powerfully felt on the page. So, no, I wasn’t tempted to punch anything up. A certain reticence became a big part of the book.

SP: Epilogue is a story of discovery through death and while it is not all bleak, there are many parts in the novel that felt like I was being punched in the stomach while reading. The Prologue was particularly painful (which, I suppose, it should be, since it is titled “Pain”) and much of the description of your mother dying was difficult to get through. A scene that I found extremely gut-wrenching was in the chapter “Strangers.” When you relate how your mother no longer recognized you at the dinner table, it seems as if the story has hit rock bottom. If I was upset reading this scene, I can only imagine how you must have felt in writing it. How did you handle writing about the terror, grief, depression and other dark emotions you felt at the time? Do you think such powerful emotions hindered or helped the writing process?

WB: It wasn’t just a process of writing scenes like the one you mentioned but re-writing and re-working and revisiting them again and again and again. I hope this doesn’t sound too grim, but I would not recommend this sort of thing to many people. I don’t know if it hindered or helped the drafting of the book. Everything takes me a very long time to write, in part because I’m an inveterate, obsessive tinkerer. I don’t think this is the best way to proceed, not at all, but I don’t seem to have much choice in the matter. I would say that it’s been a bit of a relief to get back to fiction, especially the novel I’m working on now, because I feel that I have a little more room to play around.

SP: My favorite chapter in Epilogue is “Overdue.” Even though it still connects heavily to your mother and her escalating illness, it was somewhat of a much needed reprieve. It was clever to break the chapter up by book genres and the Dewey Decimal system, but it was also extremely revealing. I felt like there was more honesty in this chapter than almost anywhere else in the book. Perhaps because it mostly contained childhood memories, but also because I think the library scenes created a strong connection with the reader. Most readers and writers haunted libraries as they grew up. Your descriptions of such simple things as the sound of books sliding into a book drop brought back a host of memories for me. (That, and your mention of the Dragonriders of Pern series…) Why did you make such a point of going into detail with the library scenes?

WB: Thank you and glad you enjoyed it! Strangely, “Overdue” is the one chapter I considered taking out of the draft. I put it in and took it out several times, and then re-wrote it at the last minute—literally on my editor’s desk, with a blue pencil and eraser crumbs piling up everywhere. I almost had a nervous breakdown. Now that I think of it, this was on 5th Ave, right across from the New York Public Library…. I had a nice time excavating the details and the tiny little sensations of my own little public library, and I came to agree with others who found the chapter a moment of quiet in the general doom and destruction, though the chapter is, in a way, a eulogy. I think dwelling with those little details became necessary, because it is, dramatically speaking, a quieter sequence in the book. I’m glad I left it in, but I definitely sweated a lot over it.

SP: The true gravity of Epilogue hit me in the last chapter. Aptly titled “Revision,” this chapter goes back over the story of your mother and father meeting, the secret marriages both had before, and the death of your father. Periodically throughout the chapter sentences are crossed out to further cement the idea of revision. This made me think about the nature of memory itself and how complicated it is. How can you ever be sure that you are remembering something correctly? Does it even matter if it’s correct if you remember it a certain way? I imagined as I was reading that these were concepts you had to consider while writing. Did the idea of memory itself ever preoccupy you while writing?

WB: I did the best I could to remember it all accurately, but you’re right—there is an inherent uncertainty in the genre: Did it happen exactly like that? You’d think that going to other sources, talking to, even interviewing others who might have been there or knew the people involved, might help with this. But, in my experience anyway, if you talk to five different people, you’ll get five different versions of what happened. We’re simply too bound up with our allegiances and our own fragile identities not to slant the actual experience in some way. So, yes, I did have many occasions to ruminate on the fallibility of memory. Most of that thinking, however, got cut out of the manuscript. I think you end up understanding that a certain degree of questioning and re-evaluating memory is a part of the genre of memoir—the proof is in the name itself--but it would perhaps be paralyzing, for reader and writer both, to lean too heavily on this. Also, I think it’s important to remember that memoir is not simply remembering. (If it were, it would be rather easier to write.) To paraphrase, Lucy Grealy, whose Autobiography of a Face I like a lot, you don’t remember a memoir, you write it. At first I thought this was a bit of a dodge on the question you’re asking. But now I think I agree. The best of the genre is every bit as artfully made as the best novels. If fiction is the art of invention, memoir is the art of selection and arrangement (and interrogation of experience and the careful balancing of tone and effect). It’s not just a transcript of actual life, in other words, but a re-enactment, a summoning, of it.

SP: Finally, I have to wonder, where do you go from here? You were a published short story writer before Epilogue hit the scene. Are you planning on returning to fiction? Do you think that possibly you will ever write about your own life again?

WB: Yes, back to fiction. I’m finishing a novel. As for explicit autobiography, perhaps. I always think I can plan 2-5 years into the future, and I always find out that I’m wrong. 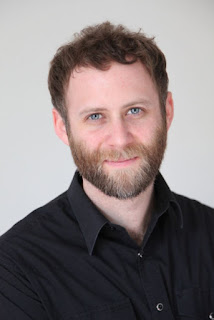 Many thanks to Will Boast for stopping by. Be sure to pick up your copy of Epilogue: A Memoir today!
Posted by Steph Post at 12:58 PM