﻿
Today I bring you an interview with Erica Wright, author of The Red Chameleon and, more recently, The Granite Moth. Wright's crime novels have been on my radar for a while and I'm glad they finally caught up with me!
Also, if you're heading up to the Virginia Festival of the Book this week, be sure to catch Wright on one of her three panels as she balances discussions on her dual specialties:  crime writing and poetry. 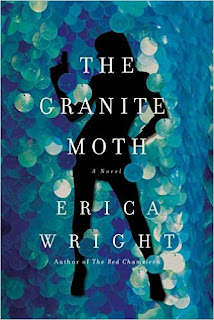 Steph Post: I'm going to go ahead and start with the obvious- the title. The Granite Moth is the second of a series of PI novels featuring Kathleen Stone, a master of disguise. The first book was titled The Red Chameleon and so there's a trend here. Both animals reference Kat's ability to don a new wig and assume a new identity at the blink of an eye, but where did the inspiration come from with using colors and animals? And is this a trend that is going to continue throughout the series?

Erica Wright: When I was twelve, I wanted to be a zoologist. Then I passed out dissecting a frog and was gently encouraged to consider other careers. I’m still obsessed with animals, though, so the titles were an extension of that interest and a logical fit for a character who prides herself on disguises. I started a newsletter because that seems to be the number one piece of marketing advice for writers, but it’s mostly about critters. Did you know that rats in Mozambique helped clear the country of landmines? Amazing. Yes, this is definitely a trend I can’t escape.

SP: The Granite Moth had been on my radar for a little while and a large part of that was due to the cover. The design here just screams that the story inside will be dazzling. It's sort of disco meets old-school pulp which, honestly, mimics the style of Kathleen Stone and your writing. Did you have a hand in the cover selection? 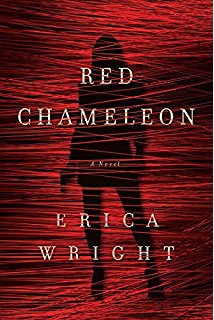 EW: Charles Brock designed the gorgeous cover. I was given a couple of options for The Red Chameleon, but this style was a great fit for the series.

SP: One of my favorite elements of The Granite Moth is the wacky humor that rides alongside the hardboiled storyline. Part of this is due to the plot- the story opens with Kat watching a larger-than-life drag queen float in the middle of a Halloween parade- but much of it comes from the protagonist herself. Kathleen Stone is serious about her job, but also has a wry wit that made this character refreshing in a sea of gritty, hard-nosed private eyes. Where did Kat's voice come from? I'd imagine she's a helluva lot of fun to write.

EW: I was reading a personal essay by Oliver Sacks who had face blindness, a disorder which makes it difficult to recognize faces, sometimes even of people you know well. I wondered if there could be a related phenomena—someone whose face isn’t very memorable or that seems to change depending on the situation. Not exactly a glamorous superpower, but one that Kat has embraced. Some of her humor comes from this reality. She could feel sorry for herself; after all, she’s a young woman who sees the same fashion magazine covers as everyone else. Or she could take advantage of her unique ability to disappear in a crowd. In some ways, this quirk is a stand-in for how she grapples with questions of identify after being undercover for two years. She’s not quite as forgettable as she likes to believe, and yeah, she’s such fun to write. I look forward to spending time with her.

SP: I haven't yet read the first novel in the series, but I felt that The Granite Moth clearly stood on its own. Is it difficult to write successive books in a series, knowing that the reader may not have read about the origins of the character?

EW: It’s easier in the sense that I know the characters better than I did at first. While they still surprise me at times, they also act in ways I understand. I realize that this might sound crazy to non-writers, but after you spend years with fictional people, they don’t seem so fictional anymore. But I definitely needed help from my editor, the brilliant Maia Larson, to show me where more backstory or explanation was required. I always want to be fair to my readers. 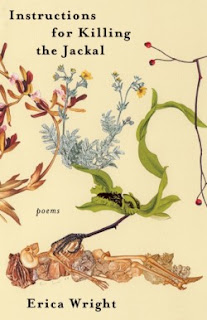 SP: In addition to writing crime novels, you are also an accomplished poet. I was surprised, but thrilled to hear this as I love it when I discover a writer who can play across the board. And Instructions for Killing the Jackal is now high up on my list. Do you find any conflict in your writing life as you straddle these two genres?

EW: I started writing fiction after I finished my first book of poems. That collection took me ten years, and my poetry tank was on empty. Instead of sending the book out and waiting for rejections to roll in (“That way madness lies”!), I started working on a novel. My first attempt was embarrassingly bad, but I still learned a lot from that failure. Now, I rarely write fiction and poetry on the same day, or really, during the same week.

SP: In addition to everything else, you are also a creative writing teacher. What is the best piece of advice or learning moment you ever received from a student?

EW: Oh, I love this question! In the very first session of my very first creative writing class, I was administering an exercise that I hijacked from one of my professors. Basically, I asked a series of unrelated questions, letting students respond to each one. It’s supposed to help with negative capability. Anyway, I was rushing through the questions because I was nervous, and this good-natured group of writers started chuckling and were all like “Take a breath! Slow down!” That was excellent teaching advice, but I apply it to writing as well. It’s not a race, and it’s not a competition. The nice part of this writing business is that there’s plenty of success to go around, which means you can root for others as much as you root for yourself. 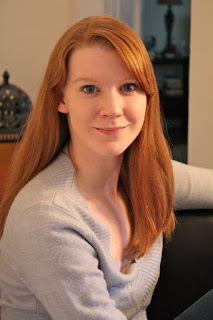 And that, if not anything else, is why I am a new fan of Erica Wright. Be sure to check out both her Kathleen Stone series and her works of poetry. You can also catch her over at Guernica magazine, where she serves as senior poetry editor. Many thanks, Erica!
Posted by Steph Post at 6:50 AM