An Interview with Chrissy Lessey, author of the Crystal Coast Series

Today, I bring you an interview with Chrissy Lessey, author of the Crystal Coast contemporary fantasy series. The final book in the trilogy, The Beacon, just debuted and I was lucky enough to catch up with Lessey on the eve of its release. Enjoy! 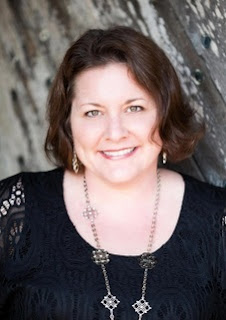 Steph Post: The Beacon is the third and final book in the Crystal Coast series which follows Stevie Lewis, a witch discovering, coming into and ultimately embracing her coven and her powers in the town of Beaufort, North Carolina. The Beacon rounds out Stevie's story and ends on a series-satisfying note, but I can imagine that it must be difficult to wrap up a trilogy. Was writing The Beacon harder than writing its predecessors (The Coven and The Hunted)? Were there any challenges you found specific to ending a series?

Chrissy Lessey: Of all the books, The Beacon was the most difficult to write. I wanted to be sure to deliver an ending that would satisfy the readers who've followed this series from the beginning, so there was quite a lot of self-imposed pressure as I worked. It was also tough to write those final chapters. I've spent six years with this cast of characters. I'm going to miss them.


SP: One of the elements of your series that I most appreciate is the inclusion of the character of Charlie, Stevie's son, and how his diagnosis of autism affects both the normal and supernatural aspects of their lives. What prompted you to create Charlie's character and why do you think he resonates so much with readers?


CL: Charlie was inspired by a loved one who is on the spectrum. It was important to me to present his character as a complete person, not just a stereotypical bundle of symptoms. This was a difficult task given Charlie's communication challenges. I had to rely on his behavior, rather than dialogue, to reveal his personality. I think that's why he resonates with readers. In real life, we know it's actions, not words, that matter most.


SP: The setting for The Beacon and the rest of the Crystal Coast series is Beaufort, North Carolina, making it not only an addictive fantasy series, but a Southern fantasy series. How important is the setting to these novels? Could Stevie's story take place anywhere else?


CL: Beaufort is practically a character in this series. It's quirky, fun, and loaded with colorful history--much like the coven. I can't envision these events happening anywhere else.


SP: All of your novels are page-turners, but I felt that The Beacon really amped up the pace and action as Stevie's saga comes to a climatic end. Was this a deliberate stylistic decision?


CL: Yes, the pacing across the series was deliberate. I wanted readers to experience Stevie's shift from normal life to her wild ride through magical events. At the start of The Beacon, the stakes are already high and the danger is imminent, so a fast pace seemed natural for that story.


SP: You're a regular now at Comic Cons- I believe that as I'm writing this you are actually signing at the Cape Fear Comic Con in Wilmington, NC. Was this Comic Con experience something new for you that came about with the writing of the Crystal Coast series or is it something that's always been a part of your life? And for someone who's never even been to a Comic Con (yes, shameful, I know...) what is it like to sign and sell your books there?


CL: I had only a vague knowledge of Comic Cons prior to becoming a fantasy author. Shortly after my first novel was released, I received an invitation to sign books at a local con. Right away, I felt like I had found my tribe and was absolutely hooked from there on. The fans come to these events with such energy and enthusiasm, it's truly a delight to meet them.


SP: And finally, I know that The Beacon is just now hitting shelves this month, but I have to ask- what's next? Is there another novel in the works or are you planning on taking a well-deserved breather?


CL: I'm already working on something new. I'm straying away from fantasy and heading into Southern fiction, but I have a feeling I'll revisit magical story lines again someday. 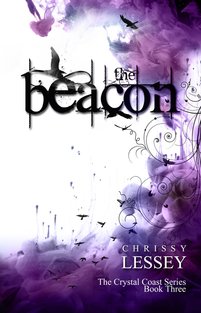 Thanks again to Chrissy Lessey for stopping by. Be sure to check out her Crystal Coast series and if you're already fan, pick up a copy of The Beacon now to discover how the series concludes. Happy Reading!
Posted by Steph Post at 10:30 AM No comments:

An Interview with Kristi Belcamino, Author of City of Angels

While it is most certainly still summer here in Florida (and will be for the next three months or so...) I think it's about time I kick-off the fall author interviews. To get us going, I'm starting off with a conversation with Kristi Belcamino, whose first Young Adult novel City of Angels debuted this past spring. As luck would have it, today also marks the release of yet another novel by Belcamino- Blessed are the Peacemakers, the latest installment in her Gabriella Giovanni mystery series. Be sure to check out both books and keep reading as Belcamino and I discuss tough teen heroines, writing for young adults and the current crime fiction scene. Cheers! 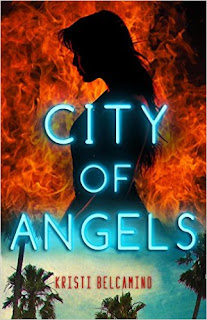 Steph Post: Nikki Black, the teenage protagonist of City of Angels is as badass in the story as she looks on the novel's cover. What prompted you to create a young, but tough-as-nails, heroine for your book?


Kristi Belcamino: I don’t have a profound answer except to say that I love reading about tough-as-nails heroines and love writing them even more!


SP: One of the elements of City of Angels that really sets it apart from other young adult novels is the setting of the '90s underground L.A. scene. How important do you think the setting of the novel is to its story and to its framing of Nikki's character?


KB: This is one of my books where I feel like the setting needed to be its own character. The atmosphere, the pervasive feeling of living in L.A. during that time, the deep knowledge that history was being made, is, in a way, that same feeling of being young and free of major responsibilities, just stepping out into the world with your whole life ahead of you. When I lived in Los Angeles at the time it felt like there was nowhere else on earth I should be, as if I were at the epicenter of everything! I tried to capture that in this book.


SP: City of Angels has been marketed as a YA novel, but even from the opening pages, in which Nikki flees from the scene of an adult movie she has been violently coerced into almost making, I could see where this story might be too much for younger readers. Nikki is seventeen, but she's a tough seventeen. How have teens responded to City of Angels? And did you ever worry that the story's material might be too mature for YA readers?


KB: It was really important to me that this novel be described as a book for mature teens. Some of the subject matter is dark and the book contains issues that some teens may not have ever heard about. But the reality is that nothing is off limits in the YA market.

I also count on the reader knowing from my book description ("… an edgy, gritty, mature young adult mystery") —and the opening pages—that this is not light reading material. I trust people to make their own decisions.

Once my kids hit middle school I stopped censoring what they read.

When my daughter was in middle school she began reading a book she picked out from the school library (the library was shared with the high school). The book was so disturbing that she had to stop reading.

It was The Lovely Bones.

I wrote about that experience for the New York Times.


SP: City of Angels is written from Nikki's perspective and I think you've absolutely managed to capture and portray the thoughts, feelings and reactions of a teenaged girl. Was it difficult for you to get into the head of a teen character?


KB: Thank you for saying that. It wasn’t difficult, but I think that is because, despite nearing 50 years old, I’m lucky to still vividly remember what it felt like to be a teenage girl. And living in L.A. in the late 1980s and early '90s was such a powerful, poignant time in my life that I still acutely recall the emotions and feelings I had at the time.


SP: Although City of Angels is your first YA novel, it is far from your first mark on the mystery and crime writing scene. You are most well-known for your Gabriella Giovanni mystery series featuring a tough crime reporter. Was it hard to switch from writing for adults to writing YA? Were there any noticeable differences in the writing process?


KB: To be honest, at first I thought it would be very difficult to make that switch, but it really wasn’t. As a writer, I’m sure you know this as well, but once I’m immersed in a new book I get completely caught up in the characters and world and just tell their stories. I didn’t consciously think about whether the book was for adults or young adults and that might be why the subject matter is not censored.


SP: City of Angels just debuted this past spring, but I'd love to know what's next for you. Will you stay in the YA genre? Go back to adult mysteries? Or is there something entirely new you're working on?


KB: The fifth book in my adult mystery series, Blessed are the Peacemakers, comes out Tuesday (Aug. 15) and I have another adult mystery coming out in October that will be the first in a new series. 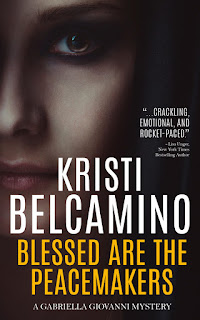 And, yes, I do have another young adult book written called Gutterpunks that is set in Minneapolis and will probably be released into the wild at some point.


SP: And finally, since you know the crime fiction scene so well and because I love to share the book-love: are there any up-and-coming crime novels or authors I should have on my radar?


KB: These crime fiction authors are fairly new on the scene (in the last few years) and are terrific. I will read anything and everything they ever write: Laura McHugh, Rachel Howzell Hall, and Claire Booth.

As far as authors you should have on your radar: Chelsea Cain, Sara Gran, Gregg Hurwitz, Lisa Unger … I could go on and on, but these should keep you busy for a while.

Oh, and you should definitely read T.M. Causey’s The Saints of the Lost & Found.

I’m going to stop now or I might never be able to finish this interview … thanks so much for having me, Steph! 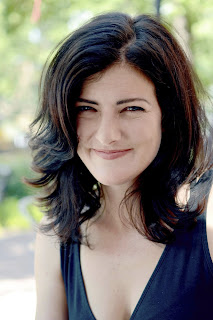 Thank you, Kristi! Readers, be sure to check out City of Angels and Blessed are the Peacemakers- on shelves now.
Posted by Steph Post at 12:42 PM No comments: