An Interview with Terrence McCauley, author of A Conspiracy of Ravens

Today I'm lucky enough to bring you an interview with Terrence McCauley, author of A Conspiracy of Ravens, the third novel in the thrilling James Hicks series. Read on as we talk technology, spies, and how to keep a story fresh. 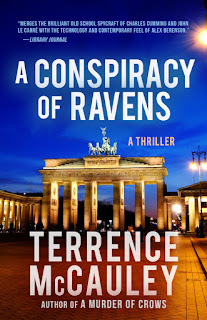 Steph Post: A Conspiracy of Ravens, your third novel to chronicle the exploits of technology-commanding spy James Hicks, not only ups the ante on action and suspense, but takes Hicks' story to the international stage. While the first two novels in the series, Sympathy for the Devil and A Murder of Crows, focus on more domestic terrors and villains, A Conspiracy of Ravens has Hicks traveling from New York to Berlin as he takes on The Vanguard, a new and dark criminal organization. Did you have to research differently for this novel, as it takes place in a location so far from your own NYC home?

While writing Crows, I asked a good friend and former Londoner several questions about the city. When he asked me why I wanted to know, I told him it was for my book. He replied, ‘Are you writing a novel or a travel guide? Make it up! It’s what you do!’ He was right.

For Crows and Ravens, I relied heavily on online research and Google Maps to help me get a sense of the places I was featuring in my stories. From what I’ve been told so far, I’ve succeeded in giving the reader just enough flavor of the locations in my books, which is exactly what I was trying to do.


SP: While A Conspiracy of Ravens offers all of the action and suspense readers have come to expect in a James Hicks novel, I enjoyed seeing the more personal, if tormented, side of Hicks as he comes to terms with his relationship with fellow spy Tali and her claims to be carrying his child. What prompted you to take Hicks' story in this direction and explore an element to him that we really haven't seen before?


TM: One of the more constant criticisms about my work has been that I don’t tell you much about Hicks, his past or his feelings. That’s intentional. When I decided to write in this genre, I wanted to avoid a lot of the pitfalls I’d seen other writers fall into. I didn’t want the scene where someone flips through Hicks’s file and discusses all the things he’d done in his career. I also wanted to avoid huge expository sentences that distract from the story. I wanted to fold these essential details into the story. The reader learns more about Hicks as events in the story become more personal to him. And as readers will see in A Conspiracy of Ravens, things become very personal to Hicks very quickly.


SP: In all three novels, James Hicks is part of a secret intelligence agency known as the University. The group employs all sorts of technology, including a computer network called OMNI, which collects data and surveys people in a frighteningly fast and thorough way. How did you come up with the idea for OMNI and how has the technology and its use evolved throughout the novels?

In avoiding those stereotypes, I painted myself into something of a corner. Any modern spy thriller has to have some technological aspect to it or it’s just not going to be convincing. So, rather than have a computer geek, I made the computer system itself something of a character in my stories. I made it relatable by having Hicks access the system through something most of us use every day – our cell phones.

Technology has moved on a bit since Sympathy for the Devil came out a couple of years ago. Back then, people said using biometrics to open a phone was absurd. Now, it’s standard in all new cellphones and tablets. As the series has evolved, I’ve kept OMNI’s technological abilities and limits fairly stable. Anything too jarring will strain the reader’s ability to believe in the world I’ve crafted. That’s why OMNI’s limits are on display in A Conspiracy of Ravens unlike any Hicks story before. I see OMNI as a character in the books, so it must evolve, too. But like Hicks, it must evolve gradually. And it will. 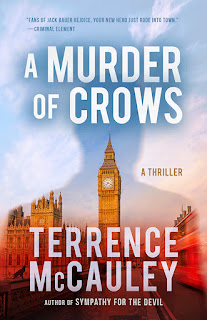 SP: One thing that you and I have talked about before is the believability of technology in thrillers and in your novels in particular. As someone who can barely find the mute button on the TV remote and who has no concept of how the magic internet works, I have a hard time discerning what is real and what is fiction when it comes to technology in spy novels. How close to reality is the technology you portray in your books?


TM: Thanks to the Snowden revelations some years back, I was able to make some educated leaps into what I considered near-technology that might not have been commonplace yet, but are certainly within the realm of possibility. See my earlier answer on the use of biometrics to open Hicks’s handheld device or to scan a car’s black box. OMNI’s ability to hack into almost any computer system in the western world has helped me craft my plotlines, but its limits in other parts of the world have presented me with some interesting challenges as well.

As our computers become more intuitive, I’ve made OMNI’s capabilities more intuitive as well. I assume by the third novel that my readers will take its abilities for granted, but I always include an explanation for those starting with the most recent book.

I always want to try to keep the reader in the story so I never want to present them with something that’s too jarring. For example, the military uses lasers now. If I put a laser in one of my novels, it might give the reader pause and kill the book’s momentum. Same thing goes for holograms, robots and Artificial Intelligence (A.I.) There are other authors out there who can write that stuff way better than I could, so I don’t even try. I always try to keep it centered on the characters and use the technology as a way to highlight their actions.


SP: Although, as I mentioned before, we do see a slightly softer side to James Hicks in A Conspiracy of Ravens, the action sequences are still as hard hitting as ever. I love how you convey tension using narrative techniques such as Hicks' internal clock. When you're writing action scenes, how do control the pacing of the plot? Is this something that comes out onto the page with the first draft, or do you have to carefully craft such fast-paced drama?


TM: I never outline, so everything you see on the page happens in one shot. I often don’t know what’s going to happen until I write it. I rearrange later, of course, but most of the action takes place in the same order it comes from my head to my fingers.

In re-writes, sometimes I come up with an additional scene to add punch where the story appears to be lacking. That happened in the drone sequence in A Murder of Crows. While I was editing it the second time, I saw there was too much of a lull and decided I needed to make a particular scene a bit nastier. But as much as I love writing action sequences, they have to serve the greater plot. If they don’t, they become gratuitous and I cut them out. My main goal in all of my work, whether it’s a novel or a short story, is to keep the story moving forward. 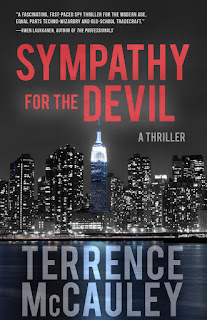 SP: A Conspiracy of Ravens ends with satisfaction for the immediate story, but is clearly open-ended. Will we see more of James Hicks in the future? And if so, do you have a plan for how many books will comprise the series?


TM:My goal is to keep writing this series for as long as people continue to like it. I’ve found the University concept more interesting the more I’ve written about it. The next book in the series is actually a sequel to one of my 1930s novels Slow Burn. That book will be called The Fairfax Incident and will show the University’s beginnings in 1933 New York City.

Without giving up too much about what happens in Ravens, I’d like to write one book a year that continues the current story line and one book that takes the reader through the University’s participation in the fight against the Nazis, the Cold War and all the way up to present day.


SP: And finally, you're big on the crime scene, writing both noir and techno-thrillers. Do you read only in the same genre that you write in? Or are there some authors or novels you love, but which readers might be surprised to find on your shelves?

TM: I have a huge weakness for zombie novels, believe it or not. Post-apocalyptic stuff is my favorite. I’d like to try my hand in the horror genre someday, but only when I think I have something to contribute. I might have something, but I’m not sure yet. And, right now, I’m kept busy with the University series and it might be a while before I get to it.

I also read a lot of non-fiction, perhaps more than people might think. I especially enjoy historical works. I’m in the middle of reading Richard Reeves’ book about the Nixon administration. I’ve also read Dark Invasion about the German attempts to sabotage the war effort in this country before World War I. Of course, the more I read, the more story ideas I get for how the University began, so it’s a vicious, but thoroughly enjoyable cycle. 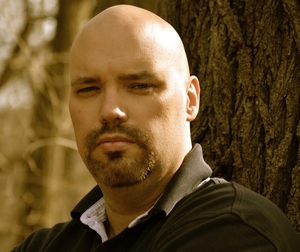 Thanks so much to Terrence McCauley for stopping by! Be sure to pick up A Conspiracy of Ravens, or start back at the beginning of the series with Sympathy for the Devil. Happy Reading!
Posted by Steph Post at 11:36 AM No comments: