Today, I bring you an interview with Douglas Light, author of the brand new thriller Where Night Stops, hitting shelves everywhere today. Enjoy! 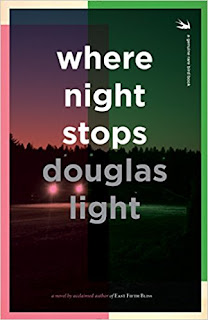 "This sinuous narrative works neatly, both as a gripping novel and a solid meditation on identity."
―Kirkus Reviews

I’ve not quit on a project, but I’ve had projects quit on me. I got to the point where I realize that I’m trying to force an idea into a form it isn’t made for. I’ve three novels that have lost momentum after I’d written a hundred-plus pages. Two of those pieces became successful short stories, and I’ve poached lines and ideas from all of them for other works.


Do you have a set routine as a writer?

I write every morning, putting in three hours before heading off to my nine-to-five. It helps me to view writing as a job, and like all jobs, there are bad days and good. The “muse” is a nice concept, but it doesn’t carry a person far—or far enough. Writing is work.

I’ve had periods of time—a day, a month, more—where what I write is awful. The work never sees the light of day. But having a block, not being able to write, isn’t something I’ve experienced. Often, I have to explore a lot of wrong directions before discovering the right one.

I lived in New York City for 21 years, and wandering the streets of certain parts of the city over the years, I’d see what appeared to be fishing line running from light pole to light pole. I discovered the wire marked the boundary of an eruv, a designated area which allows Jews to carry things on the Sabbath or holidays. I worked the concept of an eruv into a chapter of Where Night Stops. That chapter, and many others, ultimately didn’t make the final draft.

The delete key is your best friend.