Book Bites: Shuly Xochitl Cawood, author of The Going and the Goodbye

Today, I'm lucky enough to have Shuly Xochitl Cawood, author of the brilliant, if at times heartbreaking, memoir The Going and the Goodbye stop by. Cawood's work challenges the notion of a typical memoir and brings both a quietness and a weight to every page as she explores small towns, road trips, love and loss and what it means to, ultimately, let go. 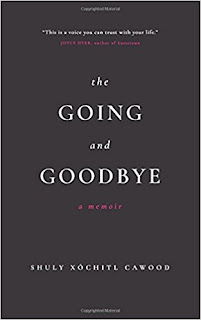 "In this lovely memoir the narrator, although strongly rooted in a particular place, is always on the move into the unknown....The lyrical, fluid style immediately invites the reader along for the ride. I read this with great pleasure!" --Bobbie Ann Mason
Which character in the memoir gave you the most trouble?

I think the character I found most difficult was myself. I think it’s easier to see other people and to recognize their qualities, both good and bad. But it took me a lot longer to see myself with more objectivity in experiences that had happened and to understand what I had done wrong and why, and to view myself via the lens through which other people might have seen me. That took me years.


Were they any parts of your memoir that were edited out, but which you miss terribly?

I originally planned on including a chapter which told the story of the relationship that finally moved me from being terrified of getting my heart broken post-divorce to discovering my former courageous self. I worked on that chapter for a long time, including during my MFA program, and it went through multiple versions. In the end, when I finally completed the manuscript and started sending it to publishers, that chapter didn’t make the cut. Parts of the original chapter did, but not the bulk of it. Still, I never gave up on that story. After the book got published, I picked up the story/chapter again and worked on it a lot more, over and over, until finally I felt like I had gotten it where I wanted it to be. It is now a stand-alone essay that will be a part of the prose and poetry chapbook I have forthcoming from Red Bird Chapbooks. I’m excited about having the story in there because it not only ties in with the theme of the chapbook, but it makes that chapbook have a connection to my memoir as well.

I switch genres. This past fall, I was focused on writing short stories, and then I got stuck in December—so stuck that I couldn’t seem to write or even edit my fiction, so I switched to poetry. Well, first I allowed myself a hiatus, which maybe some writers think you should never do, but I do take them, and they help me. When I was done with the hiatus from writing, which lasted several weeks and through the holidays, I still felt stuck, so I started writing poetry again. The poetry was terrible, but I was just allowing myself to write whatever weird thing came into my mind and let it take me where it wanted. Frankly, I was just relieved to be writing again, so I didn’t sweat the quality. After a couple of weeks, better poetry emerged. Sometimes it just takes time and patience.

This idea of defining success has been something I had to think about before I published my book, and after. Part of success for me was, first and foremost, publishing a book. That’s been my goal for decades, though I didn’t know what type of book—in high school I would have predicted it would be a novel, and in in college I would have told you my first book would be a collection of poems. Even ten or fifteen years ago I did not imagine my first book would be a memoir. Still, I have known throughout the years that in this lifetime I wanted to publish at least one book. Once I started working on the memoir and finalizing it, I realized success for the book (and for me) wasn’t just publishing it, and it wasn’t finding an agent or selling the memoir to one of the big New York publishers. Success meant publishing a body of work that I was proud to have created, that was some of the best writing I could produce at this stage of my writing career, and finding a publisher who really believed in the book and would be a partner with me on it. That drove all my decisions about publishers and the press I ultimately chose.

I don’t have just one! The best three pieces of advice I got were:

1) That if I was going to write nonfiction, I should start a blog. The blog helped me take something small that had happened in my life that day or that week and to try and write about it in a way that was compelling to readers. The blog definitely upped my storytelling skills.

2) That after I completed a draft of writing, I should go back and consider what I didn’t say and didn’t reveal in the pages. Often that is the real heart of the story.

3) And the most important: To never give up. Rejections will come—I aim for over a hundred a year—but tenacity wins.