This Friday is another 2-for-1 on the author interviews and, oddly, seems to be the day for wacky, off-kilter crime fiction. (Mercury is still in Retrograde, right?) Nick Kolakowski's new novel, Boise Longpig Hunting Club, hits shelves next Tuesday and he's stopped by to discuss Lolita, making grenades and writing the absurd. Oh, yes.... Cheers and happy reading! 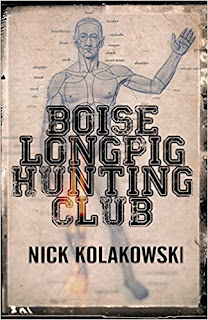 "A bounty hunter, his underworld criminal sister, and a dead body stuffed in a gun safe. What could possibly go wrong? In Boise Longpig Hunting Club, Nick Kolakowski unleashes a sordid and delightfully twisted tale of double crosses, revenge, and good ol' redneck justice. Like the bastard child of Joe Lansdale and James Lee Burke, this one is well worth the sleepless night you'll spend captivated." --Joe Clifford
Were they any parts of your novel that were edited out, but which you miss terribly?

In the first draft, there was a lengthy flashback chapter that showed how the main character, Jake, became a bounty hunter. It featured a meth-crazed lunatic robbing a bar, then trying to make a getaway in a “cab of the future” driven by a complete eccentric, only to encounter Jake in the midst of an epic bender. It was madcap and funny and weird, but the tone completely didn’t jibe with the rest of the manuscript, so with great reluctance I cut it out.

With all of my books, I try to inject a bit of absurdist humor into the proceedings, in order to prevent the narrative from getting too heavy for its own good. But it also means that, during the editing process, I end up wrestling with myself over mood—too light? Too dark? Life is strange and hilarious, sometimes even at the worst moments, but in prose that dichotomy between funny and bleak can sometimes come off as jarring.

I generally like to have firsthand knowledge of whatever my characters do, whether firing a certain kind of pistol or cooking a particular meal. When I was researching this book, someone showed me how, in theory, you could craft a makeshift grenade out of ingredients you’d find around a farm. (Thankfully we didn’t actually try to make one, because given my chemistry skills, I probably would have blown off a hand or two.) I carried that explosive knowledge around like a gem for a couple of months, fully intending to use it as part of the big finale, but it never found its way into the book—mostly because the process of making one didn’t mesh well, pacing-wise.

“Plow through the first draft as fast as possible. You can’t get hung up on perfection at an early stage, or you’ll simply grind to a halt.” Which is exactly what I needed, advice-wise; when I was younger, my impulse was to laboriously craft every single sentence. And that’s why I had such a hard time finishing longer pieces in my early twenties.

Setting is everything. Idaho is a fascinating state, facing a lot of issues right now. The book touches on a number of them—political extremism, the ‘Californication’ of parts of the Treasure Valley, and so on. The plot couldn’t exist without the location.

Nabokov’s Lolita. I know that’s a bit of pretentious answer, but I read it when I was fourteen, and it awakened me to two things. First, the suppleness and capability of language, in the right hands. Second, that there were people out there so masterful at writing that I’d never in a million years approach their level. That mix of excitement and envy has fueled me ever since.