So, it's been a hell of a week, but here's a Book Bites interview to get you through... Today, I'm talking with Willie Davis, author of Nightwolf, released just this past July. Nightwolf is a rough-and-tumble, down-and-dirty exploration of the darker side of Lexington, Kentucky, as seen through the eyes of a seventeen year old, in over his head and caught between choices that are only hard and harder. 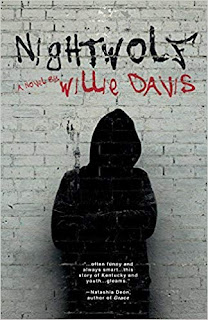 "Davis, a master of wit, one-liners and dead on observations, has done everything right. Nightwolf, often funny and always smart, is told through the eyes of Milo, a devastatingly funny and keen social critic. And through him, this story of Kentucky and youth and angst and self-discovery gleams." --Natashia Deón


Which character in the novel gave you the most trouble?

My main character, Milo Byers, took a long time to come to me because his nature is to joke about his circumstances rather than deal with them straight on. Still, I liked being in his presence, so I didn’t mind waiting until I figured out what he was going through. His best friend, Meander Casey, however, was a puzzle. On the one hand, he’s slight, and of all the casual pain dealt out by the plot, he’s the only one that really feels the bruises and welts. On the other hand, he invites pain and seems to enjoy it. I couldn’t tell if he was invincible or if he was a flower about to wilt. Eventually, I realized how he came by his pain. He could afford to be emotionally open because he knew that no one else there, not even his best friend, would really understand him. By the end, he’s the one that feels the most revealed to me, the one with the least to hide even though the book isn’t in his voice.


Were they any parts of your novel that were edited out, but which you miss terribly?

The original ending of the book was actually the first thing I wrote with these characters. It was a standalone story, but I wanted to hear more from them. I actually thought it was the opening to a book that was going to follow these characters as they adjust to the challenges that come in their thirties. But the part of the story that kept insisting on itself was when they were seventeen. I thought the second part of the book would take place with the characters in their early thirties. But then another part of the story felt far more vital. I pushed on, in part, because I knew the epilogue would be this standalone story, that showed these wild, long-suffering characters as adults, still bruised from the past, still misbehaving, but still standing, full of genuine love for one another. When it came time for the final cut, the editor said it was fun, but it didn’t add anything to the story. To me, it showed both where they came from and where they were going. But on a practical level, he was right. I spread some of the elements of the epilogue throughout the book, but I miss having them take a troubled curtain-call of sorts.

I once heard the advice that, if you have writers block, send someone with a gun into the room. It’ll clear up everyone’s motivations and give them something to do. Seems like good advice, but given how often I get blocked, my work would be nothing but people with guns barging into rooms. I have occasionally found this helpful: pick a book at random. Read ten pages, and tell yourself, “I’m going to steal something from this.” Sometimes it’s a detail, sometimes it’s a tone, sometimes it’s just a word, but giving yourself the obstacle that “something from this book is going to go into my story” can make for rewarding reading.


Did the novel have any alternate titles?

The original title was Against A Thunderstorm, a phrase taken from a letter General Sherman wrote to the Mayor of Atlanta. The mayor wrote to General Sherman asking to spare the city from his “reign of terror.” Sherman responded that were these normal times, he would not only spare the city, but would use his forces to help restore Atlanta. Unfortunately, however, this is wartime, and war rules over all. “You might as well appeal against a thunderstorm as against these terrible hardships of war. War is cruelty, there is no use trying to reform it; the crueler it is, the sooner it will be over.” It’s a quote both empathetic and heartless, and it speaks to the futility of so many of our daily fights. In fact, the only thing that quote lacks is even a tangential connection with my book. That didn’t stop me, and I called it Against A Thunderstorm anyway.

When I was starting this book, I lived across the street from a family with two young kids. They were excited because they had just adopted two stray cats. I asked what their names were, and the youngest daughter said she named her cat “Bubbles.” Then ten minutes later, she told me she changed the name to “Flowers.” After another ten minutes, she told me it was “Keisha.” I asked her brother what his cat’s name was, and he said “Nightwolf.” That shocked me—it was such a badass name. Meanwhile, I had this character who goes by a superhero-pseudonym and stalks the night. As I was yet to christen him, I temporarily named him Nightwolf, and before I could stop him, he ran off with my novel. Years later, I got word that my publisher wanted the book, but he couldn’t figure out why it was called Against A Thunderstorm. He’d publish it if it was called Nightwolf. I knew immediately that it was the right title, but also that it would mean that my literary achievement would be named after my 8 year-old neighbor’s cat.

I'm always trying to spice it up with my Book Bites and today I'm bringing you not only a YA novella (though it's really for adults, too), but a YA illustrated novella. And let's just throw 'historical' in there as well, as Brian Tucker's recently released Pokeweed is set in Hazard, Kentucky, in 1888. Here, Tucker shares his thoughts on True Grit, establishing a fictional place over a span of works, and what you can learn just by heading to the library. 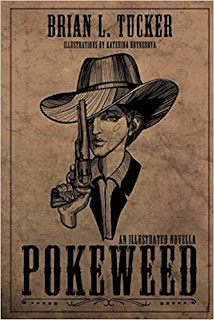 "Brian L. Tucker is writing about Eastern Kentucky in original and interesting ways, and Pokeweed is a perfect example of that. I'm excited about this newest book and eager for what Tucker does next. You should be, too." - Sheldon Lee Compton


What drew you to the genre you write in?

I wish I could stick to one genre! I’ve written in different mediums with each work I’ve released. My first work, Baptisms & Dogs, was a short story collection written in the fictional town of Seton, KY. I draw largely from my experiences of my hometown of Monticello. The collection was close to me, as it was constructed while working through my MFA program at the Bluegrass Writers Studio (2010-12). This work prompted me to think more about place and setting as a character. It led me to tackle my first novel, Wheelman, taking place in central Mexico (again drawing from a summer residency our MFA program took to San Miguel de Allende (2010)).

Following this, I tackled a second YA novel and went explicitly through a Christian publisher to house the action/adventure work, Swimming the Echo. Again, I based the story in Seton, KY and allowed personal stories from my childhood (growing up in cave country) to allow the reader to travel to Mammoth Cave and witness some of the behemoths situated below ground. Since this second novel, I felt challenged to try something new. After reading Robert Gipe’s illustrated novel, Trampoline, I thought “Hey, it’d be cool to try to illustrate a tale told east of Seton.” I thought long and hard about surrounding towns, and I let research become a part of what would eventually become my newest publication, Pokeweed. It’s an illustrated novella set in Hazard, KY, at a time just after the Civil War. In it, I utilize factual events of a not-so-famous feud known as The French-Eversole Feud to permeate the travails of a teen forced to reckon with the loss of his sister (gunned down by one of the feudists). Due to the shorter length, I sought out an illustrator, and the artist totally nailed the vision I had for eastern Kentucky at that time in American history. It is set for release September 20th, and I can’t wait to share it.

Who was your intended audience for the novella?

Anyone who’s ever picked up a copy of True Grit and thought, “This is fiction!” I wanted to cater to that crowd and tell a story in a new style. I couldn’t get the character, Mattie Ross, out of my head. Portis did such a fantastic job writing a character into existence, and I wanted to mimic that with illustrations and true accounts. While the main character, Z Snopes, is a teen in his own right, his story is one for everyone who’s trying to survive.


Was there something interesting you learned while researching the novella?

So many things happen when you check out a book from the library. For the sake of keeping this [interview] brief, I loved reading about the dwindling size of a town—post-Civil War. (Not for the hardships and pains Hazard, KY people underwent, but the raw realization that just two opposing clans wreaked so much havoc from their sins.) Much like the Hatfields & McCoys, this feud consisted of ever-present hatred. At one point, less than fifty people were stated as living in the city of Hazard. The fear of getting shot caused people to move elsewhere. I couldn’t imagine that type of thing happening, even with all of the recent shootings we’ve seen in the US.

This is a tough one. Every book can lend itself to a future idea or project. Wendell Berry’s creation of Port William in all of his great books comes to mind. So does Harriette Arnow’s books, especially Hunter’s Horn and The Dollmaker. I also love anything Thomas Merton wrote.


How important is the setting in your most recent novella?

Setting has gained so much more heft to what I write. Seton, KY started as a word on the page, and it grew from there. I wouldn’t say it’s nearly as fleshed out as Berry’s Port William, but it’s become special to me with each new book. My first thought now is, “Should I bring it back home?” And I weigh the pros and cons of starting in Seton or somewhere else. It’s nice to have that spot in mind. I love my hometown, and I wouldn’t be who I am without the people God placed in that corner of the world [Monticello].

Walk in the Fire on the Coil

Many thanks to Al Kratz and Alternating Current's The Coil Magazine for this stellar review of Walk in the Fire!


"Steph Post is on a roll with 2018’s Walk in the Fire, a sequel to last year’s Lightwood, and her third novel so far. It’s no longer sufficient to suggest Post’s work is like gritty, noir, crime writers such as Daniel Woodrell. It’s time to say the work is classic Steph Post. The catalog stands tall now." 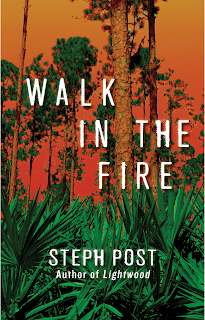