Erica Wright is a maverick. Crime writer one minute, lauded poet the next- she's pretty much unstoppable and I'm thrilled to have her back to celebrate the release of her latest Kat Stone mystery: The Blue Kingfisher. 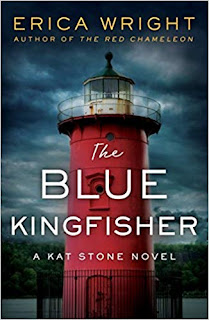 
Were there any parts of your novel that were edited out, but which you miss terribly?

Oh, what a great question. I had a scene at a campaign rally that amused me to no end. I wrote it before the 2016 election, and it was light-hearted, gently poking fun at the elaborate promises of politicians. It had a Lady Macbeth-esque figure who disrupts the evening with a paranoid rant. If I wrote it now, it would be a lot more cynical. Ultimately, I cut it because it didn’t forward the story, though, not because of tone.

How do you handle writer’s block?

No way through but through. Is that a real phrase? What I like about writing fiction is that there’s a tangible work aspect to it. When I’m writing poems, most effort takes place off the page, doing the dishes or studying a star atlas. There’s a lot of patience required, a lot of trust. Every time I start a new poem I think, what if I’ve forgotten how to do this? I don’t have that same fear with fiction. Of course, there are days when my writing’s cringe-worthy, but I’m still able to write. And maybe I don’t use those paragraphs, but they lead to a new idea. So I suppose my practical advice is don’t be afraid to write badly. As Richard Hugo would say, “When you are writing, glance over your shoulder, and you'll find there is no reader. Just you and the page.”

In your eyes, what does it mean to be a “successful” writer?

I appreciate how writers are opening up now about the realities of this career. Authors you assume write full-time reveal their side hustles, and it’s bracing but important information. I think the true measure of success is working on projects you love. Writing what you want to write. If somebody wants to publish those treasures, even better.

Did the novel have any alternate titles?

It’s funny, yes, the novel definitely did. But I can’t remember any of them. I just remember that they didn’t work. I loved the idea of the kingfisher because it’s a stunningly beautiful bird and is quite deliberate in the way it hunts. A kingfisher will find a high perch, then swoop down for its lunch. I’m interested in the idea of haves versus have-nots, those perched highest and those nearer the earth, and how that relates to crime. So I took some creative license and made “kingfisher” the title and also the nickname for someone who finds off-the-book jobs for immigrants, a key plot point.

What was something interesting you learned while researching that didn’t make it into the novel?

I learned that there are no jellyfish that cause hallucinations off the coast of New York—but I included one anyway.

Want to know more about The Blue Kingfisher? Check out my in-depth interview with Erica Wright over at LitReactor.

Want to know more about Wright's poetry and other novels? Check out my 2017 interview in which all are covered...
Posted by Steph Post at 7:32 AM