Back-to-back Jeffs! This week, I'm talking with author/friend/fellow Florida crime fiction badass Jeffery Hess whose latest novel, No Salvation, just hit shelves from Down & Out Books. For me, Jeff's words have always fallen somewhere on the scale between Elmore Leonard and James Lee Burke, so yeah, his work is pretty good. (read: smart, snappy, fast-paced, pulling no punches- I'm a fan, you could say...) ;) 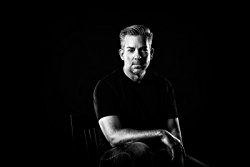 Has the publishing industry ever made you cry? What did you learn from the experience?

I can’t say it’s physically made me cry, but I do weep on the inside every time I see statistics about this country’s dwindling reading habits. Then again, I could get emotional every time I launch a book and do readings or signings and meet genuinely good people who love books as much as I do. Or when I receive a favorable review from a reader I’ve never met. Or when I receive an email or tweet about something I’ve written. One time, I actually received a Thank You card from a reader just for having written the book. That kind of stuff always chokes me up.

Along the way to wherever it is I am now, sure, there have been some heartbreaking moments of veiled and overt derision from teachers, editors, and agents. There have been a dozens of near-misses that turned on a dime for one reason or another. (All before I found the awesome team at Down & Out Books.) Those early heartbreaks and near-misses were important to go through. They were the types of instances that chase many writers from the work. For some reason, bad news and disappointment always made me work harder. It continues to. I begin every book I write with the intention of writing the book I want to read. I figure if I want to read it others might as well. I mean, I understand the dwindling number of readers. There are a lot of demands on our time and TV is so good and accessible right now. Not everyone is going to volunteer to sacrifice flashing images and sound for words on a page/screen for the time it takes to read a whole novel. The best way I know to get more people to read is to provide them with books that are undeniable. The ones readers read, love, and can’t stop talking about. That’s what I look for as a reader and what I strive for as I write—which has also brought tears to my eyes, in a manner of speaking, on occasion.

How long did it take to complete your latest novel?

I had no intention of writing about the incidences that take place in No Salvation, but one day while researching a story I was writing for my story collection Cold War Canoe Club, I stumbled upon a New York Times article about the aftermath of a race riot aboard an aircraft carrier in the South China Sea during the Vietnam War. That article led me down a rabbit hole of other articles, books, websites, and a U.S. Congressional Report that stated, “Recent instances of sabotage, riot, willful disobedience of orders, and contempt for authority, instances which have occurred with increased frequency, are clear-cut symptoms of a dangerous deterioration of discipline.” That got me hooked. I wrote a very short story about the height of the racial tensions, but I had a feeling I’d come back to that material. As time went on, I knew I had to tackle it. I spent the next year reading and making notes. But to answer your question more directly, No Salvation has been five years in the making, though I wrote another book and a couple stories in that time.

What advice do wish someone had given you when just started out as a writer/author?

I actually received that advice from a chance meeting with Randy Wayne White back in my freshman year of college. I was fresh out of the Navy and prepared to study Physical Therapy when our paths crossed outside the campus bookstore where he was promoting his novel Sanibel Flats. We struck up a conversation where I told him that ever since high school I had wanted to be a writer. We talked at length and the most impactful thing he said to me was that since I was in college, I should study writing. I didn’t even know that was possible. But the very next semester, I enrolled in a creative writing class and later made that my major. I began my first novel a month after graduation and wrote diligently for years before drawing again on his advice and went back to school for an MFA.
I’ve since reconnected with him at an author’s reception for the Tampa Bay Times Festival of Reading and I told him that story. Of course he didn’t recall that original meeting, but he was happy to hear it and we spent the rest of the time talking about baseball.

But all those years ago, his advice and the education that came from it is something for which I’ll forever be grateful. Not only did it launch me on a path of studying and work-shopping and tons of practice, and books I’m proud of, it also introduced me to some of my dearest friends.

That wouldn’t be hard to choose at all because I’d pick James Joyce’s Ulysses. Two of my favorite Mikes think so highly of that book that I’ve wanted to go back and read it in its entirety—I had to read a portion of it (hell, maybe I was assigned to read the whole thing) in a British Lit class back in college—and being stranded on a deserted island with only one book is probably the only circumstance I would get to it. That is not to suggest an unwillingness to read that book. It’s just that there are so many other books that I’d rather read and do read instead. I seem unable to force myself backward when there are so many current writers coming out with books and books by other favorite writers I haven’t gotten to yet. With so many available, I want to get to them all. But if I had to pick one…

This is too lofty of a notion to contemplate, but since you asked, I’ll gladly fantasize. In full disclosure, I’m thoroughly addicted to story. Short stories, novels, TV shows, movies. I’ve never been into comics, graphic novels or video games. Though I fully recognize their value in storytelling, they’ve just never been on my radar.

[[[[[See my previous answer about there being so many books out there that I definitely want to read and add to it the sheer number of excellent TV shows and movies and where would the time come from? Smarter people than me love and even write comics, graphic novels or video games, but I’ve never connected with those mediums. I’m sure I’m missing out, but then again, there is so much to get to in the media to which I naturally respond.]]]]]

With that said, TV or movie is a tough question. It depends largely on my book in question.
Many TV shows are amazing, obviously. If the creative geniuses behind Elmore Leonard’s short story, “Fire in the Hole” could launch six great seasons of Justified, I can’t imagine what they’d do with my Scotland Ross books (the third of which is in progress as we speak). I was also a big fan of Joe Lansdale’s Hap and Leonard series, cut short on TV, unfortunately. Those are two examples, but I could spend hours talking about them and many others.

Then again, as an example, look at the movie Winter’s Bone based on the novel by Daniel Woodrell. Concise and perfect as a book and film, which came with Academy Awards and no worries of cancellation.

There are countless other examples, but if my feet were held to the fire in an interview, such as this, I’d say that I’d love to see my Scotland Ross novels portrayed as a multi-season show and my new novel, No Salvation portrayed on the big screen. I don’t know the future, but I’m flattered that more than a few readers have told me the same thing.