One of the things I love most about the crime fiction community is how close-knit and supportive we are of one another. Writers, readers, fans- oftentimes we're all one in the same. We cheer one another on, celebrate each other's successes and spread the word. Trying to think back, I believe I discovered the work of William Boyle through rock star superfan Erin Mitchell, who kept posting about A Friend is a Gift You Give Yourself (and I think The Lonely Witness before that). Of course, Erin's taste is impeccable and I'm glad I picked up Boyle's work. I'm also glad that he was kind enough to stop by and answer a few quick questions for this week's Author Spotlight! 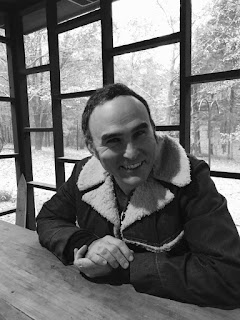 I started working on A Friend Is a Gift You Give Yourself in early 2016. I finished a draft by the end of that year but only about sixty or seventy pages from that draft made it into the final book. I made a few bad mistakes in that version and had to start over almost from scratch. I finished a second draft in early 2017—the thing that was wrong with that one was that I ended it too early. It was pretty much the book as it is now without the last ninety pages or so. I didn’t realize that’s what was missing at the time. I had the good luck to get some great advice from a couple of readers, but it took me a while to get things straight (in part because I put Friend on hold to write The Lonely Witness). When I went back to it in early 2018, I hit a stride and figured out the end of the book. So, it was about two years, all told.

Who has been the most difficult character for you to write? The easiest?

In A Friend Is a Gift You Give Yourself, I’d say Lucia was the most difficult. She was much younger in my first draft, so I had this kind of constant fuzz around her when I was rewriting her as 15. Wolfstein was definitely the easiest. Writing her was the most fun I’ve ever had writing a character. I looked forward to seeing where she’d take me, what she’d say, how she’d react to different situations.

Is there any significance or symbolism behind the names of your characters? How do you choose them?

I definitely have some character names that people think I’ve chosen for symbolic resonance (D’Innocenzio in Gravesend, for instance), but I pretty much never choose a name for that reason. Despite my last name (my father was Scottish), I grew up with the Italian side of my family in what was—at the time—a predominantly Italian-American neighborhood and I fell in love with the music and poetry of those dramatic Italian surnames. When I started writing, I plucked a lot of names—both first and last—from kids I went to school with. After that, my greatest resource has probably been the obituary page of a funeral home in my neighborhood. Amy Falconetti in The Lonely Witness and Gravesend is named after the actress Renée Jeanne Falconetti, who played Joan of Arc in Carl Theodor Dreyer’s The Passion of Joan of Arc.

I love films, and A Friend Is a Gift You Give Yourself was inspired by many (you can see some here), but I can’t help thinking it’d make a great TV show. The book could be the first season. Subsequent seasons could go in many directions: push the story further into the future; Wolfstein and Mo in L.A. in the early ’80s, or in Florida later; the story of Gentle Vic; Lucia in the present day; even old sad sack Bobby could get a thread. That seems really exciting to me.

What was the most difficult scene in any of your novels for you to write? How did you manage it?

There’s a scene in A Friend Is a Gift You Give Yourself that starts out as a long screwball set piece and descends into chaos and violence. That was the hardest (and yet most fun) thing I’ve ever written. There were a lot of moving parts, a lot of characters to keep track of. This was especially a challenge given that I tend to like keeping things small (“Fewer moving parts mean fewer broken pieces,” as David Bazan sings.) The other challenge there was the tonal shift from screwball comedy to violent tragedy. I studied one of my favorite films, Something Wild, to see how Jonathan Demme accomplished it so effortlessly.